Toots Thielemans: One More For The Road

By IAN PATTERSON
September 10, 2006
Sign in to view read count 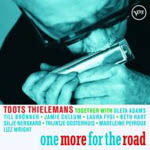 The greatest harmonica player of the 20th Century, Toots Thielemans, is showing no signs of slowing down at 84 years of age, still in demand at jazz festivals and concert venues throughout the world. One More For The Road finds him accompanied by strings and a star lineup of singers who interpret the songbook of Harold Arlen.

Songs like "Come Rain Or Come Shine, "Between The Devil And The Deep Blue Sea, "One For My Baby (And One More For The Road), "Stormy Weather, "It's Only A Paper Moon and "Over The Rainbow are part of an impressive resume which puts Arlen up there with the Gershwins as one of the great American songwriters, and in the process these pieces have provided countless jazz musicians with timeless standards for their repertoire.

The two most swinging numbers, "Come Rain Or Come Shine and "Between The Devil And The Deep Blue Sea, showcase vocalists Lizz Wright and Madeleine Peyroux. The former excels, her smoky vocals bringing sensuousness to this classic, whilst the latter, well, sounds a lot like Billie Holiday. And Beth Hart, who interprets "I Gotta Right to Sing The Blues, sounds more like Billie Holiday than Lady Day herself. Is that a bad thing? After all, both Peyroux and Hart have voices to die for. On the other hand, there is a lot to be said for originality, and the songs which work best are those where the singer's own voice comes through: Trinjntje Oosterhuis on "I Wonder What Became Of Me, Laura Fygi on "It's Only A Paper Moon, the aforementioned Lizz Wright and Silje Nergaard on "Last Night When We Were Young.

The results, then, are a little uneven. Jamie Cullum makes a good fist of one of Frank Sinatra's old favorites, "One More For My Baby," but I just can't picture him propping up the bar and bending Joe the barman's ear while playing with the ice cubes in his whiskey. "That Old Black Magic, one of three instrumentals which allow Thielemans to extend himself, sounds a little like a Henri Mancini soundtrack for a '60s Mediterranean film, the result of over-orchestration.

And what about Thielemans himself? Quincy Jones described him as "one of the greatest musicians of our age, and he is in truly fine form on this disc. He has the range and expression to rival any horn player, and while his records are sometimes labeled "easy listening," this does him a disservice—as did those who once described early Ahmad Jamal as "cocktail music." His solos lie in that zone which he himself describes as "between a smile and a tear," and are a joy to hear.

Come Rain Or Come Shine; Between The Devil And The Deep Blue Sea; Last Night When We Were Young; Ill Wind; One For My Baby Iand one more for the road); I Gotta Right To Sing The Blues; I Wonder What Became Of me; That Old Black Magic; This Time The Dream's On Me; Stormy Weather; It's Only A Paper Moon; Over The Rainbow.