The Passion: One Good Reason 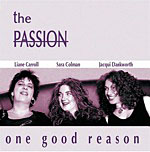 In a world where every singer struggles with the ghost of Frank Sinatra or Ella Fitzgerald, it is a rare and refreshing treat to hear a vocalist who can genuinely be said to have their own voice. Considering that this album features three such singers, One Good Reason is a truly special recording. The line-up comprises three of the finest vocal talents in Britain: Sara Colman, finalist in the BBC Radio 2 "Sold on Song" competition; and Liane Carroll, with two wins in the 2005 BBC Radio 2 Jazz Awards; and Jacqui Dankworth, herself nominated for Best Vocalist in 2006.

All three—being established songwriters in their own right—contribute compositions to the listing, both revisiting old tunes and brand new material. In addition, Loudon Wainwright's quirky "Swimming Song" is visited, closing the disc with an undulating treatment featuring alluringly constructed canon and a capella passages. Even this, however, is the closest the trio comes to the standard or cliche in either vocal style or arrangements, with the collective simpatico and overwhelming talent breathing an air of uniqueness to the approach.

Laura Nyro's "And When I Die" opens the disc with Carroll leading the trio, as preacher to congregation, in an exquisite gospel-infused prelude, heavy with soul and elan. The most venerable and evergreen "Spring Can Really Hang You Up The Most" sees the trio alternate between heavy swing and timeless chorale harmony in a refreshing performance, with each vocalist given space to develop and evolve her own interpretation. Highlights of the original material include Carroll's gutsy "Neverlands," Colman's soulful "Better Love" and Dankworth's hauntingly enchanted "Blues Come Out To Play." Regardless of the composer, verses are often split between the trio, giving each the chance to inculcate their own style and inflection on each others work, with strong and inventive harmonies punctuating the cadences and choruses, all in turn tastefully sustained and supported by Carroll's ever tasteful piano; truly a case of comping being both complimentary and accompanying.

Perhaps the title was a meant as a pun, because at no time does one voice truly overpower the trio. Even in dense, concerted passages, you can appreciate each subtle nuance, change in vibrato or balance. When the time comes to showcase an individual however, the remainder gently fades away before returning with anything from boisterous horn-like backings reminiscent of the great soul and blues records, to ethereal washes of airy sound.

It is hard to satisfy the concept that the whole is greater than the sum of the parts when given such staggering components as Carroll, Dankworth and Colman, but One Good Reason is truly one of the finest vocal-trio performances of the genre.

And When I Die; Spring Can Really Hang You Up The Most; Neverlands; Blues Come Out To Play; Prize; Change Your Mind; Dublin Morning; Still Not Ready; Better Love; Strange Woman; Listen To My Heart; You Can't Slow My Heart Down; One Good Reason; Swimming Song.