By JOHN EYLES
December 7, 2012
Sign in to view read count 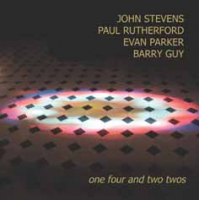 It is no exaggeration to say that without the players here the course of improvised music in Britain—and, hence, the world—would have been very different. All four were members of SME in 1966-67 (alongside those other founding fathers, guitarist Derek Bailey, saxophonist Trevor Watts and trumpeter Kenny Wheeler), as evidenced on Withdrawal (Emanem, 1997). At one time, the duo of Parker and Stevens was SME, and the two frequently played as a duo. Guy and Rutherford were two-thirds of that other key improvising ensemble, Iskra 1903, first with Bailey then with violinist Philipp Wachsmann as the third member.

On the five quartet tracks here, all four play together most of the time, creating a full soundscape that is indebted to free jazz as much as to improvisation. Stevens and Guy deftly straddle the genres, largely adopting the role of a conventional rhythm section, maintaining a steady pulse that underpins the quartet, with each of them occasionally opting for some freer playing. Even in the drummer's more wayward moments, Guy remains steady as a rock, a firm foundation on which to build. Over the top, the saxophone and trombone fit together and perfectly complement one another as they each play their own way, while allowing the other just enough space. Rutherford's highly distinctive swoops repeatedly command attention; rich and fruity, they are a reminder of just how great a player he was... and how sadly missed he is.

On the quartet tracks, Guy is credited with using electronics, but they are barely noticeable beyond an occasional high-pitched drone or chirrup which does not feel integral to the music—the use of electronics in improv was still in its infancy at the time. Likewise, on the duo tracks by Guy and Rutherford, the trombonist employs electronics; they are rather more evident as a third voice and fit in more with the music. As an improvising pairing, Guy and Rutherford demonstrate the benefit of their time together in Iskra 1903, being totally integrated and sympathetic throughout, sometimes even seeming close to playing in unison.

The pairing of Parker and Stevens is just as experienced and compatible, sounding decidedly energetic and active compared to the more stately bass and trombone combination. Anyway, why compare? These are four great musicians in peak form, with five newly released tracks from a golden age. Who could ask for anything more?