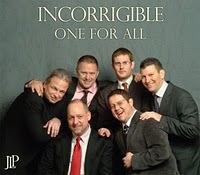 One for All
Incorrigible
Jazz Legacy Productions
2010

One for All's Incorrigible showcases some of the best original writing the group has had in its 14 releases. It no longer sounds like a bunch of "young lions" thrown together in a recording studio. Cohesive and interdependent, these musicians bring out the best in one another, resulting in an album filled with thoughtful communication and high energy improvisation.

"Bewitched, Bothered, and Bewildered," the only non-original tune, opens the album. A disappointing arrangement lacks the interest and originality of the other tracks. Usually taken as a ballad, this up-tempo modern interpretation is ambitious but falls far short of tenor saxophonist Eric Alexander's take of it elsewhere, as a leader. This is the third time Alexander has recorded the tune but it's his least melodic approach. Alexander, trombonist Steve Davis and pianist David Hazeltine sputter out impressive patterns in a modern context continuously, but lack the melodic continuity in their solos to draw the listener in. Drummer Joe Farnsworth is able to rekindle the spark of this recording with a brilliant drum solo before the group makes its way back to the head.

From this point on, the album is borderline magical. Hazeltine's "Petite Ange" is eerily macabre from the opening chords on the piano. Farnsworth seems to really enjoy playing on this one, making the most of his snare in tasteful fills as he dances all over his ride cymbal in crystal clear precision. Trumpet player Jim Rotondi blows his way through the changes with poise thanks to the support of bassist John Webber, who maintains Hazeltine's intentions with a solidified groove. Rotondi is heard next on "Voice," his tribute to trumpeter Freddie Hubbard. A mournful ballad kicks into an easy-swing for the blowing, where Rotondi and Hazeltine play inspired modern bop that is flowing and refined.

Kicking things into high gear is Alexander's aptly named title track. Weaving in and out of several key centers, it is reminiscent of John Coltrane's "Giant Steps" in the fact that it sounds more like an exercise than a composition. Rotondi and Alexander demonstrate complete domination in playing over the challenging progression. It is easy to hear the growth in Davis' playing as he takes on this war horse with a great deal of success, contributing a short but exceptionally melodic solo. Hazeltine sounds equally at home with this difficult tune, offering another quality solo before the melody is restated.

Relaxed yet dripping with bop, "Blues for Jose" is propelled by a 12/8 feel given by Farnsworth, accentuated with tasty voicings from Hazeltine until things move into more of a two-beat swing feel from Webber given underneath the piano solo. In stark contrast is Davis' haunting "Sprit Waltz," very redolent of pianist Horace Silver's writing. Davis, Alexander and Hazeltine aren't afraid to stretch a bit on this one. Farnsworth effectively captures the darkness of this piece with a very melodic drum solo akin to Max Roach.

Continuing in the Horace Silver vein, Rotondi's brilliant "Back to Back" employs a catchy bass ostinato in the introduction setting the stage for a simple but swinging melody from the trumpet. Alexander settles in comfortably with this tune and offers up the most lyrical of all his improvisations on the album. Likewise, Rotondi is right at home with these changes and plays with a conviction not heard on his previous offerings.

A satisfying conclusion, Davis' infectious shuffle "So Soon" grooves harder than anything else on the album. The triplet-infused feel of Farnsworth makes this simple melody come alive. Davis' best writing always lends itself well to a big band context because of the natural growth that occurs in his compositions due to well thought out background figures and the way his charts make a rhythm section groove like no other. All three horns and Hazeltine solo. All four nail it.

As with any One for All recording, this features many great improvisations from some of the best hard-bop musicians today. Steve Davis in particular plays well. Normally in the shadow of Alexander and Rotondi, Davis has proven that he can hold his own in this all-star group. While the sophistication of improvisation is impressive, the real treat with this album is the quality of the original composition. Eric Alexander, Steve Davis, David Hazeltine and Jim Rotondi have always authored quality tunes but these demonstrate growth and inspiration. This fine album is evident of fresh new music encompassing many styles of jazz.


Tracks: Bewitched, Bothered, and Bewildered; Petite Ange; Voice; Incorrigible; Blues for Jose; Spirit Waltz; Back to Back; So Soon.

Personnel: Bewitched, Bothered, and Bewildered; Petite Ange; Voice; Incorrigible; Blues for Jose; Spirit Waltz; Back to Back; So Soon.

Track Listing: Bewitched, Bothered, and Bewildered; Petite Ange; Voice; Incorrigible; Blues for Jose; Spirit Waltz; Back to Back; So Soon.