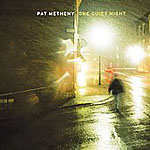 Guitarist Pat Metheny has, over the past couple years, been reissuing his Geffen-era albums, with and without his flagship Pat Metheny Group. These Nonesuch releases have all benefited from improved sonics and, in the case of Song X (1985), a well-needed remix and the addition of six tracks, completely altering the arc of this classic collaboration with Ornette Coleman. Metheny's reissue of One Quiet Night (2003)—his final release for Warner Bros. before the label dropped its jazz imprint and the guitarist moved over to Nonesuch—is, perhaps, a little more curious. Such a recent recording doesn't require a sonic upgrade, but this reissue does include a bonus track, originally only available on the expensive Japanese release of the same record, and later on iTunes.

A marketing ploy aimed at encouraging the Japanese to "buy local" in the face of cheaper international vendors, included bonus tracks are not always all that good or, even if they are, particularly relevant. The acoustic guitar solo, "Epilogue," on the Japanese edition of Pat Metheny Group's Speaking of Now (Warner Bros., 2002) may be lovely, with a title that suggests actual intention, but it possesses little in common with the rest of this eclectic album. The expansion of The Way Up (Nonesuch, 2005), on the other hand, may be of questionable value, but it is, at least, integrated with the piece and not simply an added-on afterthought.

Here, the nearly seven-minute closer, "In All We See," feels completely in context with the gentle ambience of the rest of One Quiet Night. Feeling like a personal concert direct from Metheny's living room, these 12 (well, now 13) songs—spontaneous inventions, composed original songs and selected covers—were all recorded on one guitar, with one microphone. Metheny has never made an album that explores one mood so completely, and it's to his credit—much as Norwegian pianist Tord Gustavsen successfully spends considerable time mining a very narrow field—that One Quiet Night is an album of evocative beauty, where overtly virtuosic tendencies are replaced by a lyrical examination of space and nuance.

Using a then-new baritone guitar with a broader range than conventional acoustics, and a single, altered tuning, Metheny turns an old pop tune, "Ferry Cross the Mersey," into a subtle ballad, while Keith Jarrett's "My Song" becomes more elemental. Even when Metheny lifts the tempo and changes from delicate finger-picking to more propulsive strumming on the Midwestern-tinged "Over on 4th Street," the compelling quietude of the album's title remains.

The closest reference point in Metheny's discography is his 1979 solo album, New Chautauqua (ECM). But with the passing of years and his rapid transcendence from a guitarist of great promise to one of the most influential of the past quarter century, One Quiet Night is a more singular and focused disc, and Metheny's most intimately personal album to date.

One Quiet Night; Song for the Boys; Don't Know Why; Another Chance; Time Goes On; My Song; Peace Memory; Ferry Cross the Mersey; Over on 4th Street; I Will Find the Way; North to South, East to West; Last Train Home; In All We See (bonus track).