Winston Byrd: Once Upon a Time Right Now 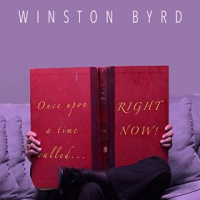 "Once Upon A Time" usually prefaces a fairy tale, Aesopian fable, or, a Hollywood action movie. While no tale of witches, Princess Brides, or cigar-chomping cowboys, this recording from trumpeter Winston Byrd and his magnificent more-than-seven is an overall right now hoot.

An aural feast where Byrd is Exec Chef, the production delivers superbly-performed ass-kicking funk, cognac-smooth contemporary, and white-hot straight-ahead jazz for take-out. The sheer diversity of the material, all performed with high energy and outstanding musicianship, adds to the album's overall enjoyment. While Byrd offers this right now, he doffs his lid to the past, sending a musical salute to Ornette Coleman in a dazzling funk kick-off track ("Ramblin'). He smacks trumpeting high-fives to greats Clark Terry ("Brotherhood of Man" and "Mumbles") and Snooky Young (when plungered on "On This Night of a Thousand Stars") and to his buddy, the highly underrated trumpeter, George Rabbai who joins him on the CT fun train.

There is a superior multi-part arrangement of "On This Night of a Thousand Stars" -complete with Byrd throwing down sonorous "Cherry Pink" cha-chas and Ferguson-like scream solos. Contemporary textures get covered by way of "Grandma Jo's House," the smoother "Times" and "Brown Eyes," and "One Love, One Life," a clap-tracked, pulsating throwback. Byrd on piccolo trumpet—a brilliant choice -covers Dave Brubeck's "Blue Rondo a La Turk" with stunning virtuosity and effortlessness. Eugene Friesen's "Anne Rising" is a gorgeous, deeply reflective ballad where Byrd's lush flugelhorn kills softly. Those two tracks—highlights both -distinguish this already distinctive album and present this performer as deeply sensitive and insightful artist who has all the musical goods and plenty more.

"Right Now" seems to offer marvelously different perspectives with each listen. That's probably due to the impeccable and ingenious production values and the hip arrangements from Byrd and cohort Gio Washington-Wright. The rhythm sections throughout, especially on the funk-drivers, are world-class thumb-pluckers and fierce headhunters.

The best and most profound fairy tales provide enjoyment, insights and wisdom, thus they stick with us forever. What's delivered here may just well do the same.