Eddie The Rat: Once Around The Butterfly Bush

By GLENN ASTARITA
October 23, 2007
Sign in to view read count 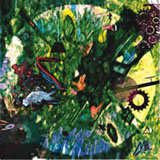 This San Francisco-based unit proves that rock music is free-game and is not exclusive to high-volume antics and memorably melodic hooks. With odd instrumentation and influences that seemingly span legendary Canterbury prog-band Henry Cow and renegade composer John Cage, the music is partly schizoid but structured.

The ensemble morphs minimalism with elements of grunge rock with variable flows consisting of tinker bell-like maneuvers and synchronous percussion movements. Some of these works communicate notions of the macabre firmed-up by Ronnie Camaro's fat bass lines and the occasional conveyance of angst. Yet the overall weirdness of this band's line of attack provides the endearing qualities.

The group renders quirky and quaint passages, but occasionally turns up the heat via thumping rhythmic structures, where notions of an avant-garde tribal dance come to mind. In various spots, they build themes against fractured ostinatos. And on the title track a flute-like sound appears atop a barrage of what appears to sound like a consortium of Jews harps—although none of the band members are credited with using either instrument.

This unit defies any strict semblance of categorization, and that's a good thing these days. Listening to Once Around The Butterfly Bush might be akin to experiencing an organic high that fools the mind's eye with a barrage of unusual sounds and implementations. The band's methodology is unlike any other—a strangely appealing endeavor, for sure.

Anamnesis #1; Mu (Unask The Question); Dim; There's No such Place As Outer Space; I Spy A Human Inside Of You; Chasing The Sun; Shortcut; Once Around The Butterfly Bush; Anamnesis #2.

About Eddie The Rat