Ron McCurdy Quintet: Once Again for the First Time

By GEOFF BARBER
November 3, 2002
Sign in to view read count 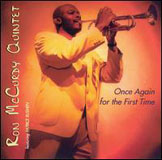 Usually when I see the title of doctor (Dr.) next to a person's name, thoughts of intellectual elitism cross my mind. Here, however, the title asserts a knowledge that transfers nimbly into catchy and sincere tunes. Dr. Ron McCurdy, having taught jazz for the last 15 years, finally decided to jump into the fray and record his own CD. He gathered some of the best talent in Los Angeles and Once Again for the First Time is the result.

Using his vast knowledge and understanding of the idiom, McCurdy is able to create some wonderfully arranged standards and originals. His rendition of the Beatles song "Blackbird" stood out right away. Both Jeff Clayton (who plays alto sax and flute) and trumpeter McCurdy both take great solos on the piece. While translating Beatles songs into jazz tunes is nothing new, McCurdy and his band mates are able to maintain the beautiful melody and still provide nice variations that display their abilities. Not only does McCurdy display his warm, Miles Davis type of trumpet and flugelhorn playing throughout, but on "Wee Small Hours" he gives us a taste of his singing skills as well. While his voice does not quite match up to his ability on the trumpet, he does display a nice feel and interpretation of the song. Other highlights include the ballad "Madeleine's Lullaby," "Barry's Tune," and the title track.

Overall, I would recommend this CD to anyone who enjoys mainstream jazz that does not push the boundaries, is approachable, enjoyable, and has rock solid playing. McCurdy and his cohorts definitely know what they are doing and have produced an album that makes you glad he is one doctor who makes house calls whenever you pop this album in.

Track Listing: Once Again for the First Time; Twin Pine; Blackbird; Madeleine's Lullaby; Barry's Tune; I Told You So; Wee Small Hours; And Your Point Would Be...?; Our Love is Here to Stay.