Joe Lovano: On This Day... At The Vanguard

By JOSHUA WEINER
October 14, 2003
Sign in to view read count 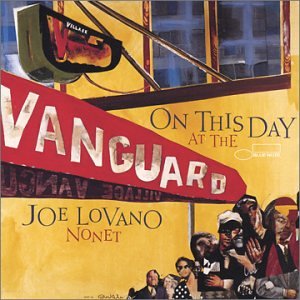 "Ah, they don't make records like this anymore," you might find yourself sighing upon first hearing On This Day At The Vanguard. But look at the liner notes: the artist is Joe Lovano, and this fantastic album was recorded live at the Village Vanguard in September of 2002.

This is the same nonet with which Lovano recorded the Grammy-winning 52nd Street Themes a few years back. While that record was a well-conceived and well-executed exploration of composer/arranger Tadd Dameron's legacy, there was something a bit restrained about it, as if the nonet were still finding its sound together. This live album is a decidedly looser, more exciting affair, delivering on the promise of the earlier record.

Right from the start of the first track, a punchy Lovano original called "At The Vanguard," it's clear that this group has found its groove. At times recalling Gerry Mulligan's Concert Jazz Band (whose excellent 1962 Vanguard album was recently rereleased by Verve), the soloists' explorations are punctuated by encouraging brass blasts from the band, beautifully maintaining the energy level as the tune rolls along. Lovely arrangements of the chestnut "Laura" (by Willie "Face" Smith) and Coltrane's "After The Rain" (by altoist Steve Slagle) allow the nonet's members to demonstrate their ability to finesse a ballad. The latter is especially wonderful, with a mysterioso intro arising straight out of the "classic quartet" playbook before the group enters to put their own stamp on the tune.

But the heart of the album is two 15-minute up-tempo tunes: an unbelievably exciting, rollicking version of Dameron's "Good Bait" which features a fabulous solo by baritonist Scott Robinson (which really gets the crowd going), among many other great ones; and the Lovano original "On This Day (Just Like Any Other)." This tune, dedicated to the late Billy Higgins, begins with a free episode for drums and two saxophones that recalls the classic Ornette Coleman group in which Higgins played, continuing with simple themes based on the syllables of the title and Higgins' name, explored freely to great effect by the group. A quartet version of "My Little Brown Book" closes the album with a late night feel, Lovano playing in his most reflective voice.

The quality of the nonet's playing rises to a consistently high level throughout the disc, but special mention must be made of Lewis Nash's impeccable drumming, especially the funky little hi-hat punctuations that continually stoke the engines of the up-tempo tunes, and John Hicks' tasteful piano comping. After listening to this record, one can't help but feel grateful for Joe Lovano's presence in modern jazz. Thanks to him, they do make records like this anymore.