Peter Case: On The Way Downtown: Recorded Live On FolkScene 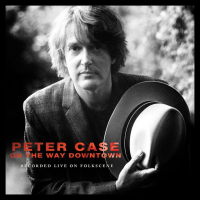 Peter Case's On the Way Downtownreminds how prolific the once and future frontman of the Plimsouls has been during the course of his solo career. Recorded Live On FolkScene captures Case just as he was gaining traction during that phase of his career and offers keen insight into both his writing and performing.

What's most noticeable right away is the ease with which the man sings. Always fluent with his vocal delivery and perhaps never more so than on stage, it's nevertheless remarkable how effortless he sounds throughout "Spell of Wheels," just to name one of the eighteen tracks. And while the lack of affectation is notable (and laudable) on its own terms, it's also important as the foundation for the sound of his music, especially in the stripped-down format of this two part snapshot.

Tracks one through nine come from a session on the folk radio program on March 1, 1998 where Peter Case is accompanied by a quintet whose sparse playing is as meticulous as the craft of the frontman's songwriting. And like all great bands, self-sufficient or in a supplemental role like this, the five men sound bigger than their number on a selection such as "Let Me Fall."

And while Sandy Chila on drums and Don Heffington (Lone Justice, among others) on percussion may be largely responsible for that impression, without the steady heartbeat of Tony Marsico's bass, the pithy guitar of session stalwart Greg Leisz would not stand out in such great relief. For Case's part, he's one nouveau-folk/Americana artist who never seems to hearken to early Bob Dylan when he plays harmonica along with acoustic guitar as he does at the base of the latter-named number (proof positive of the timeless nature of Case's originals).

This music even approaches lush proportions at certain points such as "Green Blanket (Part. 1)." Which only makes the even more minimal arrangements from two years later sound more striking in this skeletal form. And yet the rendition of Lightnin' Hopkins' "Icewater" sounds as fully formed in its own way, with David Perales on violin and harmony vocals alongside Case on guitar, vocals and harmonica,.

Each half of On The Way Downtown derives from Peter's touring in support of his studio releases of the time-Full Service, No Waiting (Vanguard, 1998) and Flying Saucer Blues (Vanguard, 2000)-production of which is hardly much more lavish than these live presentations. Yet the comparable validity of studio and stage takes on "Leaving Home," for instance, recalls a fundamental premise of great songwriting: such stellar creation will accommodate all manner of well-tooled settings.

Recorded Live On FolkScene should rightfully move listeners to delve more deeply into Peter Case's extensive discography (including the aforementioned rock and roll band as well as its precursor, the Nerves), Especially given there is no other 'official' Peter Case concert release extent, this carefully-curated and annotated title is a valuable complement to, and an essential entry within, that lengthy list. This package also reinforces the man's work ethic (as if that it's really necessary), not to mention his long-term awareness of how precious is time well spent, as depicted in "Still Playin.'" No wonder the he's pictured on this CD cover in such a reverent pose with his hat over his heart.