By DUNCAN HEINING
August 27, 2017
Sign in to view read count 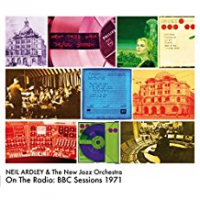 Neil Ardley was a truly remarkable individual. As well as his work in jazz as a composer/band-leader/arranger, Neil was a scientific author with 101 books to his name, which sold over 10 million copies. I spoke to him once but, sadly, Ardley had died by the time I commenced work on my book on British jazz, Trad Dads, Dirty Boppers and Free Fusioneers. While I covered his work with the New Jazz Orchestra, there was much more to be said.

Formed as a rehearsal band in the mid-sixties, The New Jazz Orchestra was a stellar ensemble, producing one of the great records of the period in Déjeuner Sur L'Herbe. The same pool of musicians would continue to be used by Ardley on his various albums such as Greek Variations, A Symphony of Amaranths, Harmony of The Spheres and the stunning Kaleidoscope of Rainbows. What makes On The Radio: BBC Sessions 1971 even more interesting, however, is the inclusion of both an NJO performance for BBC Jazz Club and a recording of an experimental, electronic piece The Time Flowers, co-composed by Keith Winter and recorded later in 1971 for the BBC's Jazz In Britain.

The Time Flowers is an ambitious piece. It owes a debt to both Eddie Sauter and his Bartokian string arrangements for the Stan Getz record Focus and a parallel debt to Karlheinz Stockhausen / Ives Ensemble (and perhaps also to Delia Derbyshire and the BBC Radiophonic Workshop). Inspired by a J. G. Ballard short story, The Garden of Time, about the passage of time and our struggle to hold it at bay, it is a suitably sad, reflective tale. The voices of Don Rendell on saxophones and Ian Carr on trumpet represent the story's two protagonists, while Barry Guy's amplified bass and Frank Ricotti's vibes offer up the engulfing wave of people and time.

Ardley and Winter seem to have composed the work in sections—an acoustic part with improvisation over strings is always followed by a darker, unrelenting electronic episode. This is particularly evident in a long section, two-thirds in, featuring Barry Guy's amplified bass. Here the combination of textures—Guy's bass, Frank Ricotti's cascading vibes, Ian Carr's trumpet trills, strings and electronics—is a remarkable combining of the acoustic and electronic and the improvised and composed. The section is followed by a duet between Carr and saxophonist Don Rendell over richly harmonic, almost late romantic writing for strings before a return to a harsher, electronic soundscape. That the music moves so seamlessly between the acoustic sounds of the orchestra and the electronic sounds provided by Keith Winter and others is a considerable compositional achievement.

The six NJO tracks offer a fine glimpse of the orchestra at work and of its collective working methods. In the main, after their first album Western Reunion (1965), the NJO largely eschewed standards, preferring to perform original compositions by British musicians and writers, often themselves members of the band. George Russell's loping twelve bar blues, "Stratusphunk," arranged by past NJO member trombonist Paul Rutherford, is the exception here. It is also the one slight let down on an otherwise excellent album. The orchestra takes the piece too fast and it loses "the funk" so crucial to its success, despite Jon Hiseman's assured and powerful drumming.

By contrast, Mike Gibbs' "Tanglewood '63" was an NJO staple and its jazz-rock rhythms are driven forward by Jeff Clyne's electric bass, Dave Clempson's guitar and Hiseman and Frank Ricotti on drums and percussion. Harry Beckett's trumpet solo reflects, as ever, the Barbadian's personality—warm and laughingly lyrical. As for Dick Heckstall-Smith's tenor (and soprano), he grabs the piece by the throat and refuses to let go. There is little doubt as to the record's highpoint. The NJO had recorded pianist Mike Taylor's "Ballad" and his setting of Alexandre Tansman's guitar piece "Berceuse" on Déjeuner sur L'Herbe and, here, Neil Ardley's arrangement of Taylor's "Half Blue" and "Pendulum" are just exquisite. There is something about Taylor's harmonic sense as a composer that recalls both Gil Evans and George Russell and Ardley's arrangement is matched by Ian Carr's bravura fluegelhorn solo.

It would be unfair to describe what follows as anticlimactic. However, Barbara Thompson's "Tierre de Miel" and Jack Bruce's "The Immortal Ninth" (a reference perhaps to Beethoven's final symphony) do not quite achieve the heights just reached. Nevertheless, both pieces are a reminder that the NJO was a "band of brothers—and sister," who came together out of friendship and a love of jazz. That sense of joyous abandon pervades both pieces, most notably in Don Rendell's virtuosic tenor and soprano solo on "Tiere de Miel" (and, I think, Thompson's flute playing), despite their tricky changes of tempo and labyrinthine chord changes. Thompson features on snake-charming soprano on Bruce's "Immortal Ninth." What a great shame it is that this piece appears to be Bruce's only big band composition. Perhaps, the performance here will tempt others to essay its intricacies. It certainly deserves a wider currency, with its curious contrasts between modal and straight-ahead big band jazz.

Hearing this music simultaneously reminds one of the strength in depth of British jazz in those times, a strength ill-matched by industry or public support. But there is also a sadness too in recalling how many of these wonderful musicians- -Ardley, Beckett, Carr, Clyne, Heckstall-Smith, Derek Wadsworth—are no longer with us. Thankfully, the music they made remains for us to hear one more the joy and passion they invested in their art.