Tierney Sutton Band: On The Other Side

By ERNEST BARTELDES
April 5, 2007
Sign in to view read count 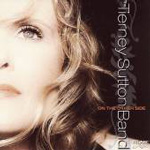 For this studio album, Los Angeles-based vocalist Tierney Sutton and her band came up with the concept of assembling a collection of songs which had to do—for better or worse—with the pursuit of happiness, something "our founding fathers guaranteed us, among other things, as stated on the disc's sleeve.

The songs, however, are not about that fuzzy, happy feeling, even if the lyrics say so. The opening "Get Happy (a song popularized by Judy Garland) finds Sutton singing as if she doesn't quite believe the lyrics. Live at New York's Joe's Pub last month, the song almost served as a statement that no, we don't need anyone telling us to be happy.

The same goes with the classic "You Are My Sunshine . In Sutton's voice, it almost sounds as if it's sung from the point of view of jaded lovers who have lost their passion but who are nonetheless stuck with each other.

"Glad to Be Unhappy is a tune that receives respectful treatment here. Sutton studied the phrasing from the Frank Sinatra version, but the arrangement is in a minor key, based on an exercise done by bassist Trey Henry during a rehearsal. Charlie Chaplin's "Smile, a song that might have been covered a few too many times, seems a little out of place on the record but worked well live. On "I Want to Be Happy Sutton is joined by trumpeter Jack Sheldon, who flirts playfully with her ("Oh Tierney, I love your body, I love your eyes ). Sheldon was not at Joe's Pub and the song suffered slightly without his banter.

ADVERTISEMENT
The band closed the Joe's Pub concert with arrangements to "Happy Days are Here gain and "Get Happy as they appear on the album, showcasing both bassist Kevin Axt and drummer Ray Brinker. For an encore, Sutton chose "I've Grown Accustomed to His Face (from My Fair Lady), a song from her 2002 Telarc album Something Cool, as an addition to the album's theme.

The Other Side is an album that needs repeated hearings to be fully grasped. It is a disc for fans of quiet, nuanced performances who can appreciate taking an adventurous approach to the Great American Songbook.

Title: On the Other Side | Year Released: 2007 | Record Label: Telarc Records