Liebig/Vatcher/Golia: On The Cusp Of Fire And Water 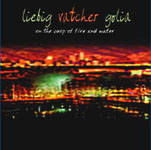 Can fate be tempted? If one has the patience, perhaps. Steuart Liebig and Michael Vatcher have known each other since the seventies but while the former was living in Los Angeles, the latter called Amsterdam his home. Over a spell of time it seemed that never the twain would meet, but then, all of a sudden, Vatcher was off on a surprise visit to Los Angeles. From then on the pieces fell into place, including getting Vinny Golia to play and recording the music, even if the drums had to be borrowed.

What transpires here is music of a high level from three very intuitive musicians. They pick the threads and spin them into convincing extensions, imagination working at prime level. Their sonic landscape keeps evolving; pastoral articulation and free-wheeling harmonic structure, odd angles and some electronica sit compactly in the spectrum. The push and the pressure are witnessed in "Transit," with Golia describing manifold arcs on the soprano saxophone and Vatcher heating it up on the drums and the air horn; Liebig adds to the momentum, his bass creating whirlwind figures. Matter of fact, Liebig's use of the contra bass guitar makes for a distinct approach that adds to the temperament.

There is a different cast to "Flurries," opening quietly on the brushwork of Vatcher before Golia gives it a new dimension, etching the groove deeper on the clarinet and stamping the tenor with his agile moves from long lines that billow to ones that descend in a shower. The sound of pop guns, a growling bass and the stritch are the "Aftermath." The way they build the layers of sound is interesting as they come together as though of one mind and take the music through different characterisations, including references to Middle Eastern music and swing.

Visit Red Toucan on the web.