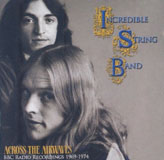 Looking back at the British rock scene of the late 1960s, it's hard to believe that bands as diametrically opposed as Pink Floyd and Incredible String Band could share a concert bill. Floyd were mining early psychedelic territory, while the largely acoustic ISB—essentially multi-instrumentalists/singers Mike Heron and Robin Williamson—were creating a kind of contemporary traditional British folk music. ISB's esoteric and eclectic nature—ranging from use of ethnic instruments to material rooted not only the British tradition, but in American folk music, blues, oriental melodies and more—defines On the Airwaves: BBC Radio Recordings 1969-1974, supporting a cultural cross-pollination that was taking place long before some intelligent marketer coined the term "world music.

Culled from studio and live performances, this largely original program may feel oddly familiar, even if you're new to ISB. Heron is the more melodious voice, with Williamson's world-weary (sometimes approaching spoken word) delivery and freer spirit a defining characteristic of his post-ISB work, right up to The Iron Stone (ECM, 2007).

While contemporary folk/rock groups like Fairport Convention would often look elsewhere for material, ISB's emphasis on original material made it a fresh alternative when it first emerged in 1966. Heron was the more straightforward writer, with Williamson the more experimental poet, again a harbinger of things to come. Tracks like Williamson's "Fine Fingered Hands bring together ethnic percussion, flutes, tamboura, guitars and more on a song that's not short on melody, but is episodic and avoids the more conventional verse-chorus-verse form adopted by Heron on the buoyant, sing-song storytelling of "Black Jack David.

Over the course of these eleven sessions—not sequenced in chronological order but, rather, in an order that gives each of these two nearly eighty-minute discs their own arc—ISB featured lineups that went from wholly acoustic to plugged-in. But while the live recordings from November 1972, featuring a six-piece ISB with bass, drums and keyboards would give a rock edge to Williamson's "The Old Buccaneer, the voluminous multi-instrumentalism of each member also makes possible the paradoxically pastoral yet melancholy beauty of "The Circle is Unbroken.

When compiling this collection, emphasis was given to previously unreleased material. Where existing material is included it's in the guise of fresh arrangements. Incredible String Band was always more of a cult band than many of its British folk contemporaries, but On the Airwaves makes a case for revisiting the historical significance of Williamson and Heron, here as well as with their subsequent post-ISB discographies.