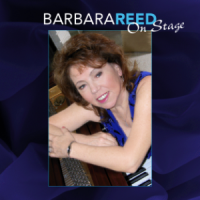 Musicians who are also authors tend to be relatively common -it's those Muse juices, you know. Mary Higgins Clark would title her books with the names of well-known popular songs. Popster parrotter Jimmy Buffett and even Madonna have penned. Barbara Reed, however, does it all: she's an outstanding vocalist/pianist/composer/lyricist—and a celebrated author whose work on all embraces song.

The LA-based Reed has been a fixture on the So Cal music scene for years. She's a solid, musically-grounded artist who can deftly shape-shift across genres—and she does just that superbly here. Reed's On Stage offers a baker's dozen tracks, a varied bunch of material incorporating Reed originals, a GASser and a few pop classics—all recorded either in studio or live.

The album kicks off with a hip Reed original, "The Tear Returns to Me," an Al Jarreau-like groover that sets the upbeat tone for the date. Reed digs swingingly into the GAS with "The Way You Look Tonight" (with a tasty Sam Riney sax solo) and also into pop dusties -a straight-up version of Teddy Edwards,' "It's All in the Game" and Bobby Darin's signature hit, "Beyond the Sea." All are delivered impeccably and with respect for melody and line. Vocally, Reed's bright soprano voice is inviting and her technical chops there and on the keys are gymnast-like. Her dynamic control and phrasing are Aces.

There's a lovely intimacy in her interpretation of a line. Her genre versatility is on also display with her original "Right Here All the Time" and the Trisha Yearwood 90s' cross-over award-winner, "The Song Remembers When." Her take on Benny Goodman/Peggy Lee and Roger Rabbit's well-known "Why Don't You Do Right" is, to Reed's credit, fun and not goofily camped up.

As a composer, Reed has got to be L.A.'s biggest secret. Her writing and lyricist ability—remember, she's also a celebrated novelist—are versatile and her word choice is always right on. The "Child in You" and "It's a Kid's World" have that special ear-and heart-grab texture that you'd swear that they were in a flick from the Mouse House. The darker "She Saw You Comin'" lets Reed soul it up blue. The closer "But It's His Eyes" is a "killer," sending us off poetically into the Hollywood noir.

The groups behind Reed are L.A.-1 with terrific taste and support. They each frame Reed superbly offering tasteful back-up without stepping on musical toes.

While there are obviously no intentions to break envelopes or redefine things with On Stage, it's a most entertaining near-hour of great music and word delivered by a very talented artist—one certainly worthy of much wider recognition. On Stage is in deed the word.

The Tear Returns to Me; The Way You look Tonight; It's All in the Game; You Can Take It All back; The Child in You; Right Here All the Time; The Song Remembers When; Beyond the Sea; It's a Kid's World; Why Don't You Do right; Remember Me; She Saw You Comin'; But It's His Eyes