On Highway 61: Music, Race and the Evolution of Cultural Freedom

By DOUG COLLETTE
December 14, 2014
Sign in to view read count 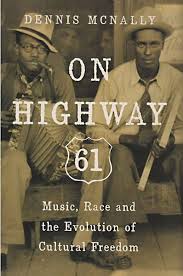 Don't be intimidated by the subtitle of Dennis McNally's book. On Highway 61 is the antithesis of the dry drone of academia. On the contrary, while this is not exactly a breezy read, the author maintains a firmly conversational tone and a healthy detachment from his subject(s), utilizing the delivery of a writer who not only knows his material cold, but knows how to keep it in perspective as he moves from one touchpoint to another.

And make no mistake, McNally is a man with perspective. The author of A Long Strange Trip: The Inside History of the Grateful Dead (Broadway, 2002) and Desolate Angel: Jack Kerouac, The Beat Generation And America  (book Sales, 1981)keeps his themes constant throughout this tome's four-hundred thirty pages, to the point he seems overstating the obvious, as when he's discussing the germination of ring songs in slavery times or the metaphorical aspects of Mark Twain's Huckleberry Finn. But that's only because, like a great instrumental improviser, he's laying out a clear structure from which to digress constructively and embroider upon extensively.

Which approach is what ensures continuity as he moves from the civil war era into the early twentieth century, embarking on a discourse devoted to institutional racism that becomes almost eerie in its echoes through the decades right up into the new millennium. In fact, it's borderline disturbing to read On Highway 61 at certain points; as McNally describes the alternately horrific and liberating sequence of events that lead to the Civil Rights Act of 1964, the cycle of repetition in suppressing the rights of African Americans, and increasingly those of women, seems to inextricably ingrained in American culture.

Not surprisingly, an undercurrent of racism and sexism manifests itself in the commercial approach to folk blues and jazz music. Yet despite the bigotry and small mindedness the author recounts, this creative movement not only manages to remain vital, but grow beyond it's respective roots in such a way it provides an indispensable outlet for a general society subject to such self-imposed pressure, it might well otherwise collapse in on itself. Even so, the cultural niches arising from the art itself, such as the record collectors community surround folk and blues studies, threaten to become dead ends rather than a means of sustaining the vigor of its subject.

Dennis McNally never underestimates the entertainment value of the music he follows in its evolutionary upward spiral. Within the realm of jazz for instance, the nurturing of such talents as Charlie Parker and Louis Armstrong allowed for youth and serious musicologists to dote on the groundbreaking freewheeling sounds even as they inevitably became diluted for show business purposes. But the author's wizened asides lighten the mood here often enough that the vitality of the art(s) never comes into question; in fact, McNally as much as suggests the life-source becomes stronger in direct proportion to the restrictions it encounters.

That dynamic, in turn, becomes a metaphor for the freedom fighting that goes on virtually unabated, though at occasionally a slower pace at times than others, both east and west of the road and the (Mississippi) river McNally uses as dividing line and focal point of the movement he's describing. It may or may not come as any surprise that the coup de grace of On Highway 61 is its final section devoted to the creation of the massively influential cultural figure that is Bob Dylan. Following Beatty and Abe Zimmerman's son all the way from the iron mines of Minnesota to Greenwich Village and around the globe, Dennis McNally creates a portrait of an artistic soul whose coming of age in the mid-Sixties almost sounds pre-ordained. The growing sense of suspense in the previous chapters reaches denouement as this final phase unfolds.

Dylan becomes the inevitable flash-point for convergent movements of art, commerce and culture in ways one of his early heroes Robert Johnson, simply could not because the blues icon did not live long enough to survive his own influence. The intertwining of music, race and freedom denoted in the subtitle of this book finds full flower in this writer's delineation of a career that broadened the blueprint for an enlightened lifestyle so distinctly we follow its outline today.

This colorfully detailed account of Dylan's rise through the world of contemporary folk music and circuitous return back into his first love of rock and roll clarifies the antecedents of this music born in the Fifties. In fact, Dennis McNally offers a presentation so vivid, it rivals that of the sequence of events itself and ultimately constitutes an arguably devout act of faith in the future, the beauty of which lies in those moments of transcendence that, like the man's electric set at Newport Folk Festival in 1965, sometimes seem like anything but the elevation of the spirit they are eventually revealed to be.