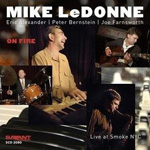 The organ combo, a time-tested format, can stick to your ribs like a good meal. Organist Mike LeDonne, tenor saxophonist Eric Alexander, guitarist Peter Bernstein and drummer Joe Farnsworth together are a tight working band, displaying all the qualities that make this formation classic and still relevant on their second Savant release, On Fire.

LeDonne, best known for his stint in the late Milt Jackson's group as its pianist/musical director, has spent the past several years making the Hammond B-3 organ a focal point in his arsenal. For a long time now, he's been a featured organist at Smoke's Tuesday Hammond B-3 nights in New York.

The quartet grooves right off with a cool swinging treatment of the soul classic "Could It Be I'm Falling In Love." Eric Alexander's impressive solo is a quick study of the big tenor sound that many younger players, except for James Carter and Joshua Redman, have forgotten. Alexander fits right in with the melody and form of the piece, tonally hinting at Gene Ammons and playing a few upper register notes that recall the huge, barking upper-register cries of Stanley Turrentine. Peter Bernstein follows with a masterful exercise in taste, letting his Kenny Burrell and Grant Green-influenced tone shine.

LeDonne's admiration for the late great "Mighty Burner," Charles Earland, is reflected in a skyrocket version of the late organist's "Spinky," based on "So What" and "Impressions." Alexander, Farnsworth and Bernstein are all veterans of Earland's combo, and Alexander in particular makes the most of his opportunity—as does LeDonne, emulating Earland's stop setting, but infusing his solo and bass lines with some harmonic twists that are refreshing to hear in an organist's approach.

Other highlights are a blue-hued take of Duke Pearson's "Idle Moments," featuring Bernstein, while LeDonne tips his hat to Jimmy Smith on a trio feature, Cole Porter's "At Long Last Love." He builds a stomping organ solo and takes us out with a little "squabbling," with great support from Farnsworth, who is what Grady Tate was to Smith: a great partner who didn't overwhelm the music. There is no question that LeDonne has a formidable technique on the organ, and this track should quiet astute jazz organ listeners who may posit that he's a pianist who cannot play organ.

By the disc's end, the listener is put in a great mood. Mike LeDonne's organ group put together a satisfying session at Smoke—for both those at the club and those listening to the disc at home. Despite the heavy nod in the direction of the jazz organ tradition, there is enough freshness here to make the album far from rote. New jazz organ albums seem more pleasurable these days, perhaps due to the fact the market is not so flooded with such albums as it was in the '60s and '70s. On Fire is fine listening for organ and mainstream jazz fans alike.

Could It Be I'm Falling in Love; Spinky; Idle Moments; At Long Last Love; Prayer for Mary; Bones; In the Bag.