By GEANNINE REID
February 13, 2018
Sign in to view read count 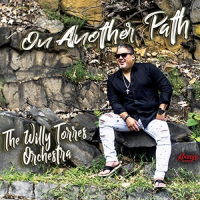 Willy Torres has released a new album entitled The Willy Torres Orchestra On Another Path, his third release as a soloist, and a follow-up to his previous albums, Hardcore (2011) and What I Bring (2008). Recorded in New Jersey and released on the Italian label Abanico Records, the album contains fourteen tracks, eight composed by Torres, and six covers, which Torres helped arrange along with Joe Mannozzi, Efrain Davila, Arturo Ortiz, Yeisson Villamar, Marcos Torres, Mike Rivera, Albert Sanchez and Nelson Negron. On this project Torres is the percussionist, vocalist, composer, arranger and musical director.

The album opens with "Guaracha y Bembe," a composition by Cheo Feliciano. The track is given a rich arrangement, with excellent horn parts and a relaxed feel. Torres' vocals are strong, and he conveys his passion for the song. The band sings backgrounds during the montuno, as Torres ad libs over the top. Jorge Castro's baritone saxophone part is brilliant, as all the horns play with crisp hits and in tune voicings.

On "Tu Tu Ta Ta / Azucar / Adoración / Muñeca" the Eddie Palmieri medley, Torres is joined by trombonist Doug Beavers, percussionist Anthony Carrillo and percussionist Orlando Vega. The band is on fire on this one! The horn arrangements are top-notch. The band flows through multiple feel changes and Torres' vocals are rich and right in line with the Palmieri sound. This track highlights the band's ability just as much as Torres' fine singing.

"Juegos de Imaginación," composed by Torres and arranged by Marcos Torres, brings things to a romantic theme. The feel is delightfully, flowing and certainly will be embraced by the romantic salsa fever rumbero circuit. Torres shows his capability to sing in a wide range, going from a soft lower register to strong upper falsetto all with grace and control. Kilo also plays timbalero and the arrangement features pianist and singer Ariacne Trujillo with great result.

On Another Path is a welcomed collection of tunes, playing and singing with elements of both traditional Salsa and Latin pop beats, which create a seductive sound. Torres' smooth tenor and infectious spirit is heartfelt throughout the recording. An album that offers dance-ability and prodigious playing is the cornerstone of success for this engaging album.

Title: On Another Path | Year Released: 2018 | Record Label: Self Produced