Mary Halvorson & Jessica Pavone: On and Off

By TROY COLLINS
August 8, 2007
Sign in to view read count 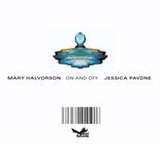 On and Off documents the ongoing collaboration between guitarist Mary Halvorson and violist Jessica Pavone. Following in the footsteps of their previous duo collaboration, Prairies (Lucky Kitchen, 2005), this intimate studio session presents a similar program of eclectic tunes.

Both former students of composer Anthony Braxton, Halvorson and Pavone continue to perform in his ensembles, those of cornetist and fellow Braxton alumni Taylor Ho Bynum and in their own numerous Brooklyn-based projects. Left to their own devices, Halvorson and Pavone split writing duties, demonstrating a predilection for areas rarely explored in contemporary improvised music.

Pavone's sinewy viola sings with forlorn resonance; robust and full-bodied, it sighs crestfallen one minute, caterwauling with puckish insouciance the next. Halvorson, a stunning talent on the rise, employs a timbre, tone and phrasing on guitar all her own. Her angular, repeated refrains explore uncharted territory with a mixture of pliant warmth and prickly assertiveness. From pointillist, acoustic mutterings to hard-scrabble, distorted scrawl, her singular approach is utterly unique.

Guitar and viola are not their only instruments, as four of the tunes feature their haunting vocals. Blending in polyphonic harmony, their delivery beguiles with unadorned emotional honesty. There is no pretension to their plainsong; pure and raw in its lack of artifice, it simply is.

Whether sabotaging the tender melodic fragments of "Hartford" with apocalyptic bursts of free jazz skronk, plying yearning folk melodies and poetic vocal refrains on the title track or careening through the knotty, kaleidoscopic variations of "The Wand," Halvorson and Pavone move from tuneful to acerbic with ease.

On and Off is yet another superlative document in the continuing development of the world's most fertile creative improvised music scene. No sleep 'til Brooklyn indeed.

Crawling; The Clouds; Hartford; Speaking With Silence; The Wand; Rods and Cones; On and Off; Round; Untitled; Gone Dancing; Revo-Lover; I Am Fine.