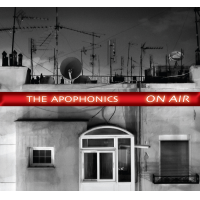 Part of the initial attraction must stem from Butcher's aspiration to go beyond saxophone, meshing neatly with Robair's intent to go beyond drums. Indeed the American is routinely credited as playing energized surfaces to reinforce the distinction. At times, the drum becomes the amplifier as Robair moves various motorized objects around the head and shell, seeking unconventional pitches. It means he can create sustained tones without needing to resort to a roll, freeing him up to add other layers of percussion. Whatever isn't attributable to bass or saxophone must be Robair, no matter how unlikely. That squeaky toy? Robair. Bubbling electronics? Likewise.

Over the years, Butcher has systematically studied the possibilities of sound generation on the saxophone. In his hands the horn truly becomes foremost a tube of vibrating air with vents in it, as he fashions an entire vocabulary at the very limits of what is controllable on the instrument, comprising multiphonics, drones, overtones and keypad plosives. Edwards is at his most experimental in this company, exploiting creaks, harmonics, taps and scrapes, as well as being the person most likely to take responsibility for moving the music forward with his swooping bow work or sonorous strum.

At 36-minutes, by far the longest cut on this session originally aired on BBC Radio 3, "Fires Were Set" moves from propulsive interplay into passages of minimalist utterance, at times almost lapsing into silence, before an interlude of extremes contrasting bat-bothering whistles and deep arco soundings. An interchange of percussive textures follows which briefly unfurl into a sort of careening free jazz, only to subside into a more ambient soundscape, before reverting to a final section reminiscent of the opening gambit. A series of gong-like metallic resonances stand central to "Met By Moonlight," circled by saxophone susurrations and bass thumps, while "London Melodies" suggests a city with no ear for a tune, but a hearty appetite for uncompromising timbral exchange.

But of course the real achievement here lies not in the juxtaposition of novel and disparate noises, but that they are assembled, married and executed, via three refined musical sensibilities, into coherent and stimulating expression worthy of repeated listening.