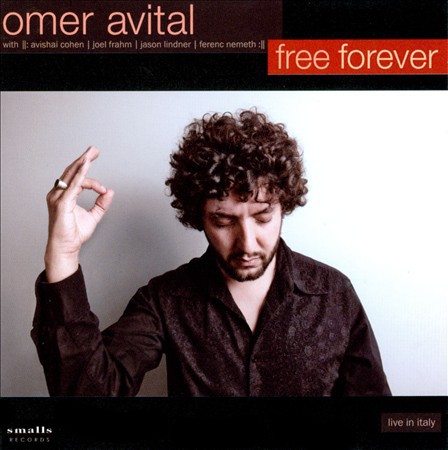 Bassist Omer Avital is not a household name. Despite a surge of media coverage about the rise of Israeli expats on the New York jazz scene, despite playing a central role in a variety of ensembles at the now-beloved Smalls jazz club, and despite appearing on several dozen recordings, Avital's name continues to register as little more than a faint echo in the background of the jazz consciousness. Perhaps he has a bassist's natural tendency to support rather than to shine in the spotlight, or perhaps his loyalty to the high-quality but low-visibility Smalls Records keeps his audience limited. But make no mistake: Avital has quietly been turning out his own stellar brand of yearning, cross-boundary post-bop for over a decade now. Free Forever ups the ante.

As much a composer and bandleader as a pure player at this point, Avital's music works best when it has room to breathe, when the dynamics ebb and flow like the tides. His melodies are frequently soaring, emotional statements that gather force as his band alternately pushes forward and pulls back. This pulse is usually determined by Avital himself, who employs an entire arsenal of pedal points, ostinatos and intervallic somersaults to create a driving motor at the center of the music. The faint echo of the oud in this technique provides the tension of something slightly exotic, but the driving rhythm and bluesy undertones of his harmonies provide release into familiar territory.

Arrival (Fresh Sound, 2007) reined in some of the sprawl. While that focused attention on the strength of Avital's compositions and added more overt cross- cultural references, it sacrificed some of the emotional spontaneity that is so appealing in his music. Free Forever, a live date from early 2007, thankfully recaptures much of that expansiveness. Surrounded by several long-time collaborators (trumpeter Avishai Cohen - Trumpet, pianist Jason Lindner and saxophonist Joel Frahm), here he also welcomes Ferenc Nemeth to the drum chair. It is a quintet, but it sounds much bigger. Much like in the playing of William Parker, Avital uses a forceful attack to push the rhythm of a piece; and much like in the writing of Charles Mingus, the horns and piano layer a deceptively deep mix of counterpoint and unison, replete with call and response effects. So that on the driving surge of "Simcha," amid the lush, waltz-time sprawl of "The Shepherd," or under the percolating thrum of the thrilling title track, the ensemble achieves a sound richer, denser and more varied than the sum of its parts.

Producer Luke Kaven makes much in the liner notes of Avital's "eclecticism"—his borrowing of forms from his Mediterranean heritage, and the adeptness with which he welds them to a more traditional jazz approach. This, however, would never work if the bassist did not have a strong compositional voice, as much tied into his own playing as that of those by whom he is surrounded. The head of the gargantuan album closer "Ray of Sunlight," for instance, announces itself with Cohen's bright, flamenco flourishes, before Lindner injects a Cuban-tinged rumble in the bridge, and then Frahm's soprano solo soars with a more typical post-John Coltrane urgency. Throughout the opening of "Free Forever," Lindner's prepared piano echoes Avital's throbbing pedal point, maintaining a faint Middle Eastern suggestion. But when the horns climb into the keening theme statement over Nemeth's thunderous backbeat, he opens up into steady octave voicings before erupting into a descending cascade of block chords. This kind of synthesis is subtle, but tremendously effective.

There are two slight drawbacks to an otherwise superb set: first, the more than 15 minutes of solo "interludes" drag a bit, as the long running time can distract from the direct impact of the full quintet's music. Still, the impulse to retain the feel of a live set with a group this freewheeling is understandable. Secondly, the audio feels slightly bright in the highs and a little thin in the lows, which could be frustrating for those who know the true forcefulness of Avital's playing. The sonic quality is quite good overall for a live recording, however, and the energy with which the band plays more than makes up for the slightly underwhelming fidelity in the bass.

This may not be the album that makes Omer Avital famous, but it is perhaps the finest session in his discography to date. Not because it is the most refined, or because it represents a great break with what has come before it. Instead, because it is the culmination of years of work absorbing, refining, paring and expanding. This is Avital's sound, a heady mixture of myriad sources, stirring melodies and the improvisational imperative, and Free Forever captures it at its height.