By DAN MCCLENAGHAN
September 24, 2015
Sign in to view read count 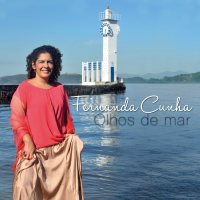 The Brazilian sounds, Samba and Bossa Nova, washed over the United States like a wave in the early sixties. American saxophonist Stan Getz, in his collaborations with Brazilian artists Antonio Carlos Jobim and Joao Gilberto, on Getz/Gilberto (Verve Records, 1962) and American guitarist Charlie Byrd, on Jazz Samba (Verve Records, 1962) can take a good deal of the credit. The craze culminated, perhaps, with the radio hit "The Girl From Ipanema," from the Getz/Gilberto disc, featuring a lovely and dispassionate vocal by Astrud Gilberto.

Jobim, who was so crucial in that formation of that early wave, has been extensively covered and re-worked over the decades, but Brazilian vocalist Fernanda Cunha, on Olhos de Mar has chosen to cover previously unreleased songs by contemporary songwriters from Brazil: Antonio Adolfo, Cristovao Basto, Carlinhos Vergueiro Gonzaga and more.

Cunha and the composers carry the tradition well. There is a gentleness and simplicity to the Brazilian sound. It is a music without artiface or a hint of grandstanding. Piano, guitar, bass, drums, with an emotive singer out front, and rhythms that flow like a peaceful stream.

An enchanting, soothing set of contemporary tunes from Brazil.