By BRUCE LINDSAY
January 21, 2015
Sign in to view read count 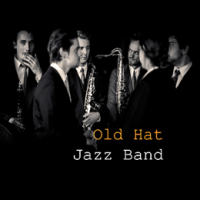 Brevity, so Polonius informed us, is the soul of wit. In which case, this four-track debut recording from the UK's Old Hat Jazz Band might well be the wittiest release of the year. It's also a tease. Four short tunes full of life, energy and nuanced performance give a contemporary twist to early jazz traditions, offer a reminder of just how entertaining this music can be and make the advent of a full-length album from the octet something to look forward to with relish.

Drummer Elizabeth Exell formed the Old Hat Jazz Band in 2012 while she was a student at Trinity Laban Conservatoire of Music and Dance. At first the band concentrated on interpreting tunes from the '20s and '30s: members started to write original tunes in mid-2014, evoking the early decades of jazz with what it calls "contemporary hot jazz." All of the tunes on this recording are originals—three from Exell plus saxophonist William Scott's "Ledra Street Stomp."

The title of "Forbidden Fruit" hints at illicit pleasures—the tune's energy and swing, mixed with slower more sultry passages, takes that hint and runs with it. It's an ideal soundtrack to a risqué silent movie, perhaps featuring Hedy Lamarr. "Gentleman" is a jaunty tune, Ewan Bleach's baritone sax solo giving the number an irresistibly cheery centre. The press release refers to this track as having a "dandy and light melody," which seems like a fair and accurate description. Scott's "Ledra Street Stomp" fairly steams along, courtesy of Exell and bassist Louis Thomas. Joe Webb's 8 bar piano solo is the tune's lively heart, the interactions between all the players highlighting the band's strength as an ensemble.

"Grandma Iris," dedicated to Exell's grandmother, is this all-too-short EP's crowning glory. Stately and haunting, it contrasts with the lightness and joie de vivre of the other tunes and demonstrates the Old Hat Band's musical range. The Sidney Bechet style melody, played by Scott and then trumpeter Michael Soper, fits into a sparse arrangement which allows James Kitchman's rhythm and lead guitar playing to come to the fore. Lovely.

Fourteen minutes after "Forbidden Fruit" springs from the speakers, it's all over. The shortest of acquaintances, but one that makes it feel like the Old Hat Jazz Band is already a valued friend. Any band that's proud to refer to one of its tunes as "dandy" deserves success: if the band can produce an album's-worth of tunes as dandy as The Old Hat Jazz Band then such success should be there for the taking.

About The Old Hat Jazz Band