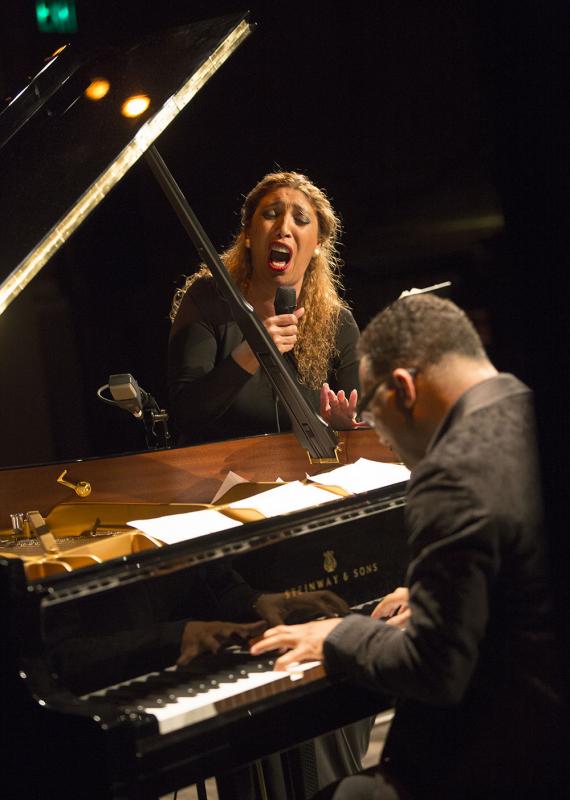 They met for the first time in Spain. One a Cuban-born jazz pianist, the other a Flamenco singer. Both were internationally acclaimed performers. They came together as part of the documentary film project Playing Lecuona —which celebrates the life of the great Cuban composer Ernesto Lecuona—and then parted ways.

The pianist, Gonzalo Rubalcaba, later received a surprise communication from Esperanza Fernandez, the vocalist, who approached him with the idea of collaborating on a presentation of the music of Cuban sonero Beny Moré (1919-1963) and Andalusian flamenco cantaor Manolo Caracol (1909-1973).

Born in Havana in 1963, Rubalcaba initially emerged as a major figure in Afro Cuban jazz during the 1990s. He has played with the likes of guitarist Pat Metheny, as well as with the late bassist Charlie Haden. Touring Europe, he played the 88s for the legendary Cuban ensemble Orquesta Aragon. Nominated a total of 15 times for Grammys, he has won two Latin Grammys as a leader, and two for his work with Haden.

Born in Seville in 1996, Esperanza Fernández Vargas came from a lineage of flamenco singers, guitarists and dancers. Debuting at the tender young age of 16, she has appeared with numerous stars of the genre and has performed with a number of orchestras; she has recorded two CDs thus far.

Moré, born as Bartolomé Maximiliano Moré Gutiérrez (1919-1963), is considered by many to be the greatest popular singer Cuba has produced. The owner of an expressive tenor voice, which he employed to full advantage, Moré mastered such diverse Cuban musical genres as the bolero, mambo, son montuno and guaracha. Unusually for a singer, he was equally proficient at both faster rhythms (such as guaracha) and the slower slower ones (such as the bolero). Known for heading the 1950s' foremost Cuban big band, Moré also was the lead singer of Perez Prado Orchestra and a member of Conjunto Matamoros. All this, and he was unable to read music!

Born in Seville, Spain, Manuel Ortega Juárez. (1909-1973), who used the stage names "El Caracol" and "Manolo Caracol," was a Spanish flamenco cantaor (singer). Coming from an extended family tradition, his family was also known for its bullfighters. Known for his flamboyant personality as well as his incomparable voice, he commercialized the form, creating flamenco "opera" and even starring in several films. Tragically, he met his end in a car crash.

The duo's collaboration came to fruition this March when a Miami premiere was followed by a debut at the Herbst Theater. Nina Menéndez, the founder and artistic director of the Bay Area Flamenco Festival (now in its 11th year), relates how she came to bring the band here to San Francisco for the 2016 festival:

"We featured the extraordinary Gypsy flamenco singer Esperanza Fernandez at last year's Festival and she mentioned to me at that time that she was considering embarking on this project with Gonzalo Rubalcaba. I had first met Gonzalo in the late 1980s when he was playing after hours in Havana's Johnny's Dream Club Rio with a jazz group called Sonidos Comtemporáneos, led by saxophonist Nicolás Reinoso. My brother, Pablo Menéndez (who now directs the afro Cuban jazz-fusion band Mezcla), was lead guitarist in Sonido at the time; Gonzalo was on drums and/or piano depending on the night. He was already clearly a musical genius and I immediately found him unforgettable.... So I encouraged Esperanza to follow through with the collaboration and promised to present them here in San Francisco as soon as they were ready."

The presentation of "Oh Vida!" was the result. And that Saturday evening, after the introductions, the stage was dimmed, and the spotlight focused on Rubalcaba, whose lovely piano solo ushered in the classic bolero ballad "Oh Vida!" (1955). The rest of the band joined in as the tune heated up: versatile electric bassist J.M Popo, Jorge"El Cubano" Perez on congas, bongos, and cajón: and percussionist and dancer José Fernández Vargas. The soaring voice of Fernandez rose above it all, bringing Moré's plaintive, sentimental lyrics to life:

"Life without your kisses makes me suffer
Hours of agony pass without you.
Another piano solo introduced the Flamenco number "Popurri de Zambras." (Zambras being a famous Roma dance, whilepopurriis the Spanish word for "potpourri.") It featured a dancing and singing Fernández who captivated the house. Throughout the show, she used hand movements and dance steps, danced at time with a large white fan, even tap dancing at one point on a platform and gestured while she sang, to great effect. The sidemen's percussive and rhythmic contributions—hand clapping, solo or in duo, atmospheric droning bass, beats on the cajón—which added greatly to the mix. Some numbers into the set, Fernández left the stage—leaving Rubalcaba to solo with his customary intricate precision—and then returned donning a luminous blue gown, a garment which drew wows of appreciation from the audience.

The evening climaxed with "Santa Isabel de Las Lajas," Moré's proud, glowing homage to his hometown. A standing ovation and overwhelming demand brought them back for the night's second version of "Yiri-Yiri Bon," another Moré classic.