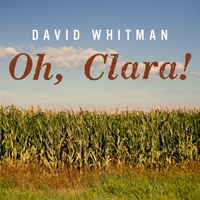 David Whitman is a charismatic drummer with a diverse and elegant approach to his music. The sound on his recent release, Oh, Clara!, has a smooth, smart and sophisticated sound, inspired by genres as diverse as fusion, jazz, and even pop.

Whitman teamed up with a cast of talented musicians in order to create a phenomenal debut release, featuring ten renditions of classic songs recorded over two sessions at Hollywood's legendary Capitol Studios. This album also features two new arrangements and eight original compositions by Andrew Neesley, a Grammy-nominated composer. Tracks such as "Dear John" or "Quiet" are a perfect example of the amazing production aesthetics of this release. The songs are often strong in their own arrangements, on the sheer musicianship of the artists involved in the project. On the aforementioned tracks, Whitman and his band set out to explore a more modern and crisp sound, with some stunning laid back beat, sparse piano arrangements, and groovy bass tones.

On the other hand, on songs like "Feelin' Alright" or "Monty's Bag," the band showcases a more traditional approach, performing pure and unadulterated jazz numbers with taste, confidence, and verve. On this record, Whitman is accompanied by top-tier jazz performers such as Francisco Torres, Tom Luer, Geoffrey Keezer, Rob Thorsen, Tomek Miernowski, Chris Montgomery and Andrew Neesley, who contributed to the the creativity, talent, and musicianship that went into the making of this record. I am a big fan of recordings that allow the band's performance to shine naturally, and this is exactly the case. The drum sound, in particular, is clear and direct; it almost feels like being in the same room with the group as they take it away on a nice club stage. The natural texture of the release really adds to the clarity and authenticity of the music, highlighting the effortless performances of these talented artists and making for a truly amazing natural tone.