By NENAD GEORGIEVSKI
April 13, 2011
Sign in to view read count 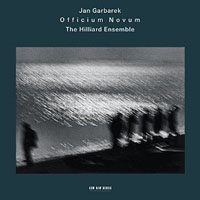 Officium (ECM, 1993) paired renowned Norwegian saxophonist Jan Garbarek with The Hilliard ensemble—a vocal group with a formidable reputation in the fields of both early and new music—playing a riveting and gorgeous set of compositions that were 500 years old. This unusual pairing proved to be a match made in heaven, as the subtle and wistful tone of Garbarek's 20th century instrument somehow found its place as another voice among the beautiful voices of the Hilliard ensemble, receiving rave reviews. The fruits of that collaboration continued with a series of concerts and a sequel, the double-disc Mnemosine (ECM, 1998), which consisted of both old and new music (written by Garbarek), Because of its more adventurous nature, it cemented the group's reputation even further, as "one of most unusual experiments in musical alchemy."

The keenly anticipated follow-up, Officium Novum is another great achievement. The focus has shifted through geographies and centuries, as the group draws the majority of its material from Armenia (as adapted by Komitas Vardapet), Yerevan, Byzantium, Russia, France and Spain, along with two Garbarek originals and one from Estonia's Arvo Pärt,' "Most Holy Mother of God."

Recorded in the special ambiance of the monastery of St. Gerold in the Austrian Alps, as with its previous recordings, the group's playing remains brilliant—unified, sympathetic and deeply creative. A strong feeling and affinity for the material allows Garabrek and The Hilliards to approach it with both reverence and freedom: the saxophonist's phrasings, at times, subdued and inward; at other times, flourishing and alluring. His reflective subtlety of shading and tone has determined an ambient musical identity in the past, and proves to be the perfect backdrop for the overall perception of this project. In the world of today's jazz, Garbarek is truly a rare find, as this type of collaboration has rarely been seen elsewhere. What he has done, with this and other similar projects, is to take ancient musical forms and advance them with improvisation.

Officium Novum is quite meditative in nature; it is truly amazing that this music was written ages ago, yet continues to inspire and provoke attention. The Hilliard Ensemble and Garbarek have saved something very deep and enchanting from oblivion, and their collision truly breathes new life into these ancient chants. Credit must be given to producer Manfred Eicher, as he helps the musicians avoid academic stuffiness. This music truly communicates, the combination of five voices in perfect unison, Garbarek creating a richly colored sound that lulls, consoles and uplifts.