Mark Levine and the Latin Tinge: Off & On The Music of Moacir Santos 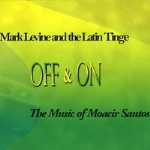 If a record could be like a comet streaking across the musical stratosphere, then Mark Levine's Off & On: The Music of Moacir Santos would be just that. Moreover, in personifying this album like comets are given names, this one would be named after comet Kohoutek because it is a rare gem of a record.

It's one of the few occasions in recent times that Moacir Santos, the rarer of two modern Brazilian masters, is being honored. Brazilian music in North America usually suggests the name of Antonio Carlos Jobim. Few, if any, artists and aficionados of the music will even recall Santos' name. Not that he is obscure by any stretch of imagination; Moacir was a teacher and mentor to such luminaries as guitarists Baden Powell, Oscar Castro-Neves, Joao Donato and Dori Caymmi.

Santos was born in Pernambuco, in arguably one of the culturally richest parts of (northeastern) Brazil. He began performing at three years of age and like few before him, completely imbibed the primeval Afro-Ethnic culture of the region. In a short period, his music acquired a singular sophistication about it, while retaining the visceral northeastern quality in its rhythms and especially in its melodies.

Santos' approach was melodic—in the top of the melody and its bottom—the bass lines were written for the lower melody. This lent an exquisite air to his melodicism—one where the heavy surdo and pedal point were softened into unheard melodic lines while still retaining the underbelly of the bass structure. No one, not even Jobim for all his lyricism, had done this before. There is something more about Santos. The sounds he heard came from deep African canticles—also shared by Haiti and Cuba (via Haiti). Therefore, this record by Mark Levine becomes not just an offering of love and respect, but also an authentic document to Santos' music.

The repertoire on this record is mixed. There are familiar tracks such as the superbly affectionate and primal maracatu, "April Child." Several other classic Santos creations include "Suk-Cha" and "Nana." Others, such as "Early Morning Love" and "Kathy" may be lesser known. Everywhere the arrangements are about invention and deep feelings. Santos' angular approach to rhythm and his jazzy approach to instrumentation send the music soaring high.

This is a highly courageous attempt at creativity by Mark Levine. To bring a musician's work out into the open—and one from relative obscurity, is commendable. Mary Fettig occupies Santos' reeds chair and she does a star turn, superb on soprano. The fluttering beauty of the flute—especially contrasted with the contrapuntal, as well as the bellowing on the bass clarinet on "Suk-Cha" are miraculous. Michael Spiro is ever so elegant—again. John Wiitala on bass and drummer Paul van Wageningen complete what is truly a magnificent group.