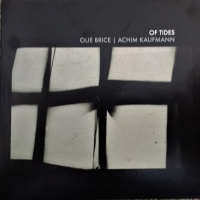 Recorded live at The Vortex in December 2014, Of Tides combines London double bassist Olie Brice and German pianist Achim Kaufmann in a duo. Bass and piano is an uncommon combination for a twosome, this one having arisen after the pair initially combined in a trio that also included Roger Turner on percussion. Potential obstacles to Brice and Kaufmann collaborating include an age gap of nearly two decades, and the fact that the pianist rarely plays in London. Despite such trifles, initial contact was instigated by Brice after he was impressed by the pianist's recorded work with bassist Mark Dresser on Starmelodics (Nuscope, 2009).

Brice's instinct that he wanted to play with Kaufmann proved to be spot on, as the two have a great deal in common and are highly compatible, each being involved in a number of ensembles—some as leader—and composing too. Kaufmann impressed Brice with his flexibility and the range of his playing styles which include jazz (for example, see the YouTube clip below of his solo performance of "Crisp Day" by Herbie Nichols) as well as abstract playing and going inside the piano. The five tracks here, totalling just over an hour of music, contain abundant evidence of his versatility and ability to weave such diverse elements together into a coherent, satisfying whole. Although improvised, this will appeal to jazz and improv fans alike.

Key to the music's success is the evident empathy and sense of discovery shared by the pair. Throughout, there is a pervasive feeling that they respect one another as equals, each prepared to give the other time and space before coming back and responding appropriately. Overall, their playing together is highly reminiscent of players who know each other's playing inside-out after decades performing together—but we must remember that this recording comes from the early days of their time together. Yet, if this music were wine, it would not be fruity and fresh but full-bodied, mellow and mature. It certainly whets the appetite for further recordings of Brice and Kaufmann together.

Moss Grew in the Cracks; The Rumble of Constant Adjustment; Cogitations; To Heap; Of Tides.