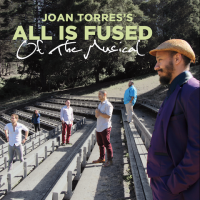 Bassist Joan Torres's journey as a musician led him to many interesting places. Born and raised in Puerto Rico, he gravitated towards bass at an early age and attended several Berklee College of Music programs as a high school student. It was through one of these that Torres met world-renowned bassist Oscar Stagnaro, whom he counts among one of his earliest mentors.

It was during his formative years that Torres made connections with the musicians that he continues to collaborate with today; it was also during his early years that Torres played in a wide variety of ensembles. These included: his university's exclusive chamber choir Corium Canticusa, a Reggae group that eventually became the indie group Raices Rusticas, a Puerto Rican Plena orchestra named Plena Juventud, the Indaka Jazz Quartet as well as the Gabriel Vicens Quintet.

Needless to say, Torres' music, played by his main project Joan Torres' All Is Fused, is influenced by a variety of styles. Listening to the sounds and moods their latest record, Of The Musical, explores, one is reminded of jazz fusion as much as contemplative indie rock. The band really excels at the latter, one example being the track "Ultramarine." With beautiful textures offered by the keys and two electric guitars, the rhythm section strikes an excellent balance between laying a comfortable foundation and creating movement as the tune progresses.

The record's concept is interesting in and of itself. Presented as two acts, each track being a "scene," the music shifts in focus. The first act's music, as is described in the booklet accompanying the album, feels "overwhelming," which the composer ascribes to "emotions, running rampant." The compositions in this first half are ambitious and interesting, but not always executed as clearly as they could be, the album's opener "Invaded" being one example.

However, by the time we reach the album's closer, "Unleashed," it feels as if the often cathartic experience of writing, playing, rehearsing and recording music has worked its magic within the band, and by the time the tune is opened up for solos, a fusion of the excited energy from the beginning of the album and the more contemplative vibe from the second half create a satisfying closer to a unique record.

Title: Of The Musical | Year Released: 2016 | Record Label: Self Produced