National Health: Of Queues And Cures 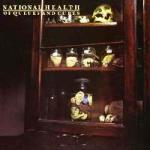 First issued in 1978, the passing of time has rendered this music ageless, as opposed to setting the seal as a product of an era. But for a change of bassist and name (National Health), the brand of complexity underscoring the group's music was of a radically different order to that of an earlier band (Hatfield And The North). Where in Hatfield's case there was no shortage of whimsy of a particularly English order, here it is replaced by a harder edge, albeit one no less rooted in virtuosity. The music is still delivered with a diffidence that happily keeps it from inhabiting typical progressive rock.

There's a certain kind of joy, too; the type that's obvious whenever a band enjoys playing together. Thus the instantly memorable melody of "The Bryden 2-Step (for Amphibians) (Part One)" is supplemented by all sorts of tonal color through the deployment of trombone and cello, while rhythmic momentum is maintained by drummer Pip Pyle. Former Henry Cowell bassist John Greaves fits hand-in-glove with the band's ethos, despite the minimal level of musical overlap between the two groups.

"The Collapso" also has a memorable melody and it's similarly treated to all sorts of alternative displacement, often within the space of a few seconds—running, as it seems to, like a thread throughout the duration of the piece. For all the density of musical activity there's a lightness of touch and an air of fun which keeps the earnest at bay, especially during Greaves' fuzz bass solo.

Guitarist Phil Miller's "Dreams Wide Awake" flirts with convention in its Momentum, but Dave Stewart's organ solo manages to maintain a far less discreet distance from it. When the music breaks down at around the two-and-a-half minute mark, it's by way of a breather prior to more activity coming into the mix, which is resolved in lyrical fashion.

The second part of the "The Bryden 2-Step" (for Amphibians)" rounds things off but not in such a way that the level of continuity between the two parts is pronounced—not, at least, before it becomes apparent that this is a band able to turn at a moment's notice. The fade out, in contrast to the beginning of the first part, suggests music which could go on forever, which in this case, is an uplifting thought.