Tim Bedner: Of Light And Shadow

By DAN BILAWSKY
December 28, 2012
Sign in to view read count 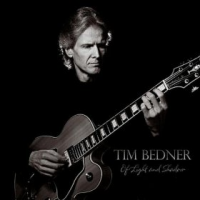 Guitarist Tim Bedner is a master of mixed moods and color contrasts. The Ottawa, Canada-based Berklee alum manages to successfully wed forlorn feelings with lighthearted notions and darker thoughts on the all-original, always-absorbing Of Light And Shadow.

Bedner's greatest strength is his ability to separate himself from the crowd that believes intensity goes hand in hand with volume, aggression and excessive effects. He brings a sense of balance and measure to the music that allows him to build tension by contrast, not bombast, a quality borne out by his brooding lines on "Umbra" and wily work on "Synergetic." Elsewhere, his music dwells in a state of cloistered serenity ("Sometimes Sadness"), melds Brazil and the blues ("Bluenote"), operates in sunny places ("A.M. For P.M."), and comes across like a lovely breath of fresh air ("Waltz For Elise").

The guitarist's band mates are few here, with only two others aboard the ship, but numbers can be deceiving. Normand Glaude, for example, covers bass, percussion, synth strings and harmonica, but it's the last instrument on that list that really makes an impact; his Toots Thielemans-esque harmonica is the perfect foil for Bedner. The guitarist veers toward the contemplative when left to his own devices, but Glaude pulls Bedner out of himself by bringing a wonderfully breezy insouciance into the music. He can be cool and casual or bubbly and charming, depending on the situation, and he always manages to make his mark in subtle ways.

Drummer Jeff Asselin doesn't come off as the near-equal partner to Bedner that Glaude does, but his role is no less important. He understands the firm-flexible duality that resides within a drummer's job and he elevates each performance with his work. Sometimes, it's simply a case of coloring in the deep or helping the music to sway, but some music calls for more firm direction and grounding; that's when Asselin's personality really appears. He's equally comfortable with odd-metered grooves and drastic feel shifts, and Bedner gives him a chance to show it at various times.

Of Light And Shadow doesn't win out with power or fireworks; it simply seeps into the pores. Tim Bedner's magical music finds a way to burrow into the inner soul.