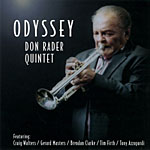 While listening recently to the album Voyage (SWR, 2006) by Don Menza with Germany's SWR Big Band, my ear was drawn to a marvelous flugelhorn solo on the ballad "Where Are You?" I glanced at the tray to see who was playing. It was Don Rader—and it was no surprise. Rader is one of those remarkably lyrical trumpeters—like Marvin Stamm, Bobby Shew, Bob Summers and a handful of others—who can burrow straight to the heart of almost any song and gently enfold the listener in its warmth and beauty.

During a notable career that took wing when he joined Woody Herman's band in 1959, Rader has performed with a who's who of jazz luminaries from Maynard Ferguson, Count Basie, Stan Kenton and Harry James to Les Brown, Louie Bellson, Terry Gibbs, Benny Carter, Bill Holman, Frank Foster, Bob Florence and Rob McConnell. The reason you may not have heard his name mentioned recently is simple: Rader has lived, played and taught for more than a dozen years in Australia, which is where he found three of the four young sidemen who round out his splendid quintet on Odyssey, one of a modest handful of albums Rader has recorded under his own name.

Two of his colleagues, pianist Gerard Masters and drummer Tim Firth, studied with Rader at Sydney University's Conservatory of Music. Rader met saxophonist Craig Walters in the 1980s, when he and Lanny Morgan were touring New Zealand (Walters later moved to Sydney), and has known and worked with bassist Brendan Clarke for about ten years. They blend well together, maintaining a tight-knit groove whose group discipline empowers a free flow of individual resourcefulness. Percussionist Tony Azzopardi adds color and steam on "Bernie's Tune" and Rader's "Wilmas."

If you've heard Rader before, it is enough to note that he is playing as well as ever. If you haven't, be prepared for a singularly pleasant surprise. He's a master on trumpet or flugel, at ease in any framework and at any tempo. He's well-served by Walters, an ardent post-bopper most reminiscent of Jimmy Heath or George Coleman, and Masters, an inveterate swinger whose left hand always knows what the right hand is doing, and vice versa. Clarke and Firth give them a wide comfort zone in which to navigate.

Rader wrote four of the nine selections and arranged all save two ("3 of 9," Walters' "Untapped Resource"). Rounding out the delightful program are Bernie Miller's "Bernie's Tune," Kenny Barron's "Voyage," Ornette Coleman's "Ramblin,'" the standard "Alone Together" and Rader's ballad feature, Tadd Dameron's "If You Could See Me Now." This is but the latest chapter in Don Rader's Odyssey, one that is still being written as he enters his seventy-second year. It's an engaging narrative, well worth seeking out and perusing.

Eagle Has Landed; 3 of 9; Bernie's Tune; Alone Together; If You Could See Me Now; Untapped Resource; Wilmas; Voyage; Ramblin.'