Odean Pope Quartet at the Philadelphia Museum of Art 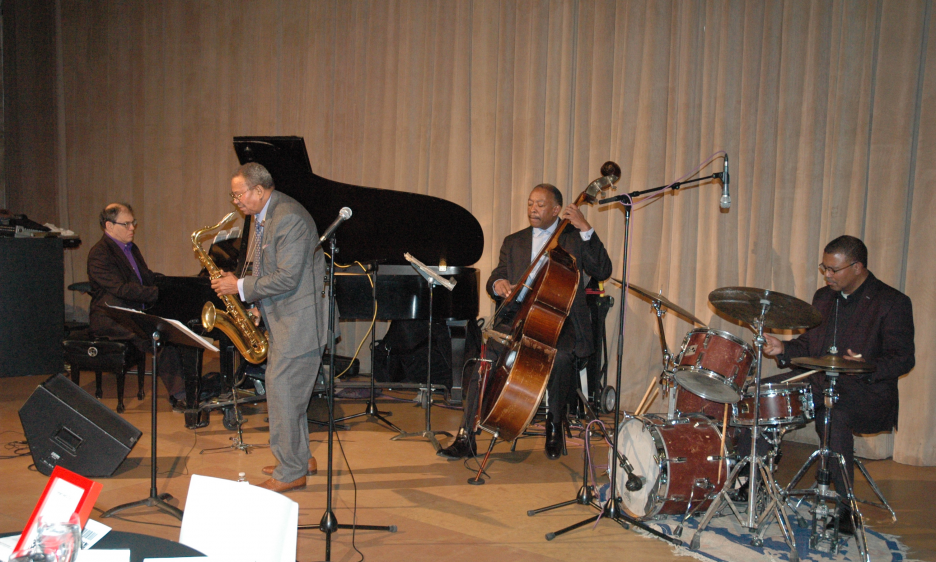 The great tenor saxophonist Odean Pope came up in Philadelphia and still calls it home. He obtained his sea legs together with pianist Ray Bryant, John Coltrane and other young woodshedding musicians in Germantown and around the city way back in the 1950s when they were developing the new hard bop approach. And he advanced to the top in the 1960s with Max Roach's Quartet. His Saxophone Choir is known world-wide, and he has continued to develop his own style until now, an octogenarian, he plays with a fortitude, expressiveness, and nimble virtuosity that sometimes boggles the mind. And his playing stands in nobody's shadow, not even Trane, and always bears his distinct signature and creative impulse. He exemplifies what he is quoted as saying, namely:

Pope was deservedly the 2017 recipient of the Mid-Atlantic Living Legacy Award for Jazz at the Kennedy Center. This concert in itself offered ample evidence for his legendary status.

Pope came on with his superb rhythm section of Tom Lawton on piano, Lee Smith on bass, and Craig McIver on drums. After a warmup "Blues in B Flat," they immediately got into high gear with the standard "If There is Someone Lovelier than You," with Pope's remarkable sound and virtuosity getting the heart palpitating with excitement. The atmosphere of the whole show was soul-stirring for this reviewer because of its swing, freshness, and energy, which brought back memories of jazz concerts in New York when Count Basie, Ella Fitzgerald, the Coltrane Quartet, George Shearing and the like wowed stadium and concert-hall audiences with electrifying performances in venues like the Apollo and Randall's Island.. On this night, decades later, the Great Stair Hall of the Art Museum was packed with avid listeners, creating an atmospherics of renewal and aliveness which this new era sorely needs.

When he played Thelonious Monk's "Ruby My Dear," Pope brought out its sheer beauty beyond even the greatest vocalists' renditions. Then he took a solo cadenza which, thanks to his mastery of circular breathing lasted for about fifteen minutes without a pause to inhale. Pope's lungs must have been manufactured by the people who made the Sherman tanks. Inexhaustible power emanated from his horn throughout the night. And his chromatically engineered rapidly executed improvisations never ceased to amaze. His compositional skills became manifested in his original tune, "Fresh Breeze," which frankly was more like a tornado than a gentle wind.

Pianist Lawton has performed at the Art Museum several times in the past, and his "Man Ray Suite," based on the Museum's collection of the artist's work, garnered accolades from critics and listeners alike. At this point, Lawton received a pleasant surprise.. Pope called a jazz journalist from All About Jazz to the microphone to give the pianist a Lifetime Achievement Award which read: "In honor and acknowledgement of your decades of outstanding piano artistry, compositions, teaching, and inspiration, and with gratitude for your many contributions to jazz music, the Philadelphia and Delaware Valley communities, and the world jazz scene. You have enriched countless performances with your musicality, the depth of your interpretations, and your creative ability to stretch the envelope of the music." Maestro Pope, the other musicians, and the audience heartily concurred.

A highlight of the evening was Pope's stunning rendition of Frank Loesser's "Say It (Over and Over Again)," which appears on Trane's Ballads album. It was so full of kinship with Trane that it seemed like the latter was playing it from above. The beauty and power continued through several standards and originals to the very end, a little known piece called "Coltrane Time," which Trane never recorded but which Pope obtained from bassist Reggie Workman.

Pope, as always, allowed ample time for solos by the members of the quartet. Lawton and Smith each did their usual brilliant improvisations during several tunes, with Lawton waxing romantic like Rachmaninoff on "The Night Has a Thousand Eyes." But the most astonishing work of the sidemen was by drummer Craig McIver, who topped the evening off with a solo to die for. The always fine McIver, once a young man who got jobs with everyone because he was just plain good, has matured into a true artist and craftsman, turning in a flawless rhythmic accompaniment to Pope and the group.

Set List: First Set: If There is Someone Lovelier than You; Ruby My Dear; Odean's Cadenza; Fresh Breeze (Pope); Second Set: Say It (Over and Over Again); The Night Has a Thousand Eyes; Framed in a Picture; Family Portrait (Pope); Coltrane Time.