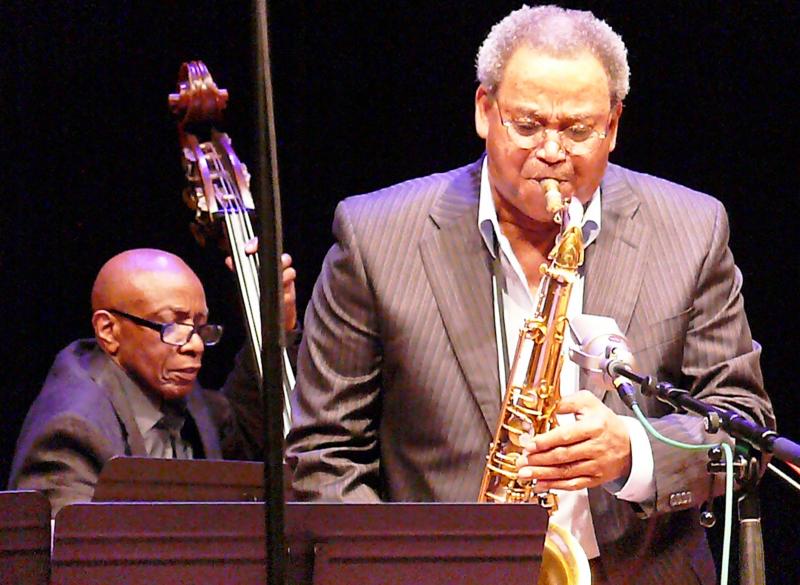 Legendary tenor saxophonist Odean Pope, in addition to his international status and iconic recordings, often appears in Philadelphia, his home town, but usually in festivals, concerts, and other situations where he is part of a bigger mix. His one evening show at Chris' Jazz Café gave listeners a special opportunity to hear him in an intimate setting where they could really attend to the subtlety of his playing in addition to his intricate long runs fueled by his innovative circular breathing. For the occasion, he assembled two of his "regulars," Lee Smith on bass and Craig McIver on drums, along with the resilient services of Tom Lawton on piano, who has been a sideman with Pope on various gigs. The ensemble suggested the iconic John Coltrane Quartet, and there was more than a hint of Trane in this performance. Ideas were easily stimulated regarding the similarities and differences between Trane and Pope, who came of age together in North Philadelphia in the 1950s. The inclusion of two songs from Coltrane's Ballads album (Impulse, 1963) further suggested that Pope had Trane clearly in mind. The set included several Pope originals, including the opening number, "Prince Lasha," (pron. LAY- sha) named after the late great saxophonist who recorded with Pope on The Mystery of Prince Lasha with the Odean Pope Trio (CIMP, 2005). This upbeat hard-pounding rendition featured solos by all the musicians, showing their remarkable virtuosity. Here, McIver captured Pope's former leader-mentor Max Roach's approach to the drums, while Lawton's comping and solo grasped the essence of Pope's own well-honed style. (Pianist sidemen too often go their own way, and Lawton's approach was an object lesson in how the pianist can help an ensemble form a tight unit under the aegis of a leader with his own distinctive signature.)

Pope's spiffy and well-tailored grey suit provided a gentlemanly contrast to the typically casual attire of jazz musicians, and he carried forth his gentility by dedicating, with a touch of humor, the standard "Too Young to Go Steady" to his manager Deena Adler and her long time husband who were seated in the front row. Pope's introductory cadenza of adolescent falsetto sounds and squeaks continued the musical joke, but soon was transcended by a Coltrane- like lyrical approach to the tune. Trane's legato playing was so seamless that it has been called "sheets of sound." Pope's sound is a unique blend of roughness and beauty that might by comparison be called "ribbons of sound." He is a player whose lyricism might be missed in faster numbers. Here, in his own special way, he did Coltrane proud. The nod to Trane's Quartet was furthered by Lawton's powerful solo which echoed McCoy Tyner's use of the strong left hand and chord clusters.

In another ballad, "Old Folks," which became a jazz standard by virtue of Miles Davis' rendition in the album, Someday My Prince Will Come (Columbia, 1961), Lawton provided the introduction, and then Pope used his circular breathing technique to weave exquisite long runs wrapped around the melody with well-crafted intervallic and harmonic changes all his own. Lee Smith, who is earning his way into the pantheon of legendary bassists, provided a heart-stopping solo that combined startling multi-fingered technical virtuosity with haunting emotional expression.

The group then provided contrast with "Knot It Off," Pope's own upbeat hard bop tune that was unmistakably influenced by Sonny Rollins. In addition to Pope's virtuosity, this rendition was magnificent in the coordination of the ensemble playing, another feature of the Trane Quartet. Each man soloed with finesse, and then the whole rhythm section did intricate co-improvising that sounded like one instrument playing polyrhythms. Finally, to make matters even more exciting, drummer McIver traded intense rounds of fours and eights with each musician.

"Trilogy" is a dark and sonorous original with a sense of mystery and a distinct African influence; a song of the plains. Was Pope thinking of Coltrane's "Africa" from the album Africa/Brass (Impulse, 1961)? Pope's harmonic changes and Lawton's solo brought the piece to a boil.

A surprising moment occurred when Pope introduced the great trumpet player, Eddie Henderson, to do a guest appearance on the two concluding numbers. Pope made it seem that Henderson happened to be in the audience, but it's more likely it was planned in advance, though not on the bill. Henderson has a brilliant sound and a bebop inflection that perfectly complemented Pope's darker gospel blues sonority. The two performed another tune from the Coltrane ballad repertoire, "Say it Over and Over Again" followed by "Blues for PC,"a hard bop tune dedicated to bassist Paul Chambers, his friend and a one time Davis and Coltrane associate.

The performance exemplified Pope's exceptional ability as a group leader to bring his ensemble into meaningful and diverse dialogue with complex musical implications. It also represented a highlight of the nightclub season in Philadelphia, where the jazz club scene has suffered attrition and chaos in the past few years. Pope brought a special dignity to this event, and the clientele and staff at Chris' added a feeling of special respect for what Billy Taylor called "America's classical music." Hopefully, this is both a return to a great tradition as well as a sign of things to come.