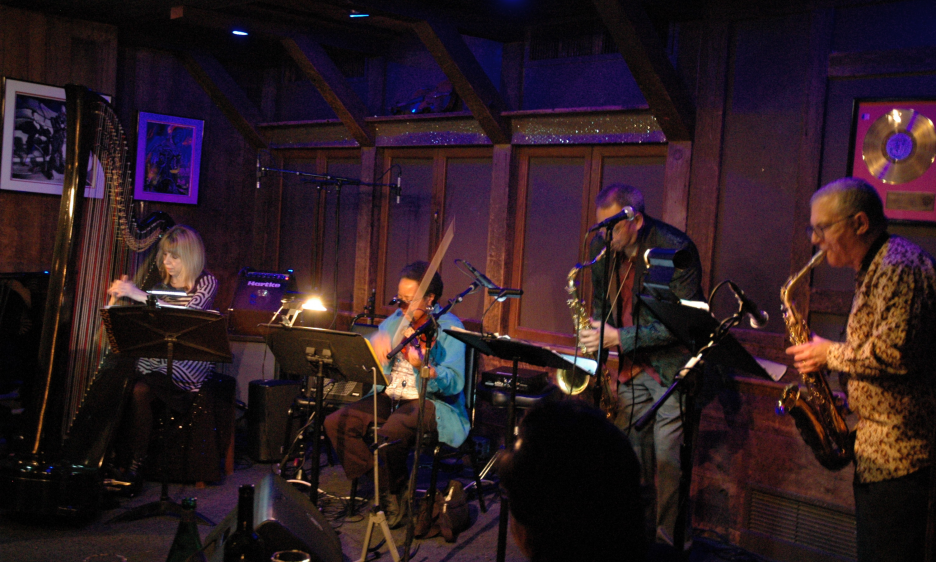 Time honored saxophonist Odean Pope has always been creative with fresh musical ideas. Who knew that this time he would field an unusual ensemble of harp, violin, and two saxophones without a rhythm section? Indeed, curiosity is what brought this reviewer to the show.

First of all, this was not crossover (jazz/classical) music in the strictest sense, although it often had the flavor of French impressionist music such as Faure and Debussy. It was fully rooted in the bebop/hard bop idiom. All the music was composed and arranged by Pope, except for a ballad, "Bellisima" written by harpist Gloria Galante. By the way, she improvises terrifically, and comps like a seasoned jazz veteran, which she happens to be. She is a professor at West Chester University where she directs the music department harp program. She also is the director of the Philly Harp Jazz Ensemble. Not since Caspar Reardon of the 1930s has there been such a hot harp player, although Alice Coltrane did take some turns on the harp (for example on McCoy Tyner's Extensions, Blue Note, 1970). In fact, Galante was mentored by her some years ago.

The set began with Pope's "Collage," taken as a ballad with a dream-like impressionist feeling with the harp's arpeggios suggesting a lazy afternoon in the French countryside. But there was real action in Bobby Zankel's alto and Pope's tenor sax soloing, with Pope emphasizing his strong John Coltrane influence. (He alternated throughout the set between his own supersonic speed lines and the distinct sounds of Trane.)

'Knot it Off' was taken at a rapid clip, with a halting rhythmic pattern and a feeling of a fugue as the players reproduced one another's phrases with a bar or two delay. Diane Monroe, truly one of the great jazz violinists of this or any other time, got in there with a signature flaming solo that claimed everyone's attention.

Galante's "Bellissima" stated the melody by the harp, but there soon appeared a two saxophone riff that repeated through the duration. Another stunning solo by Monroe earned her the "virtuoso of the evening" award, which is very hard to do with Pope on stage with her, since he usually takes that status away from everyone else.

Pope's by now standard tune "Framed in a Picture" began with an impressionist flavored violin solo by Monroe, which was followed by an artful alto saxophone solo by Zankel at his multi-modal best. His controlled playing provided a good balance to Pope's livelier flexibility and rapidity. Again, Pope sounded like he was riding the Trane tradition.

The set concluded with a multi-faceted suite-like "2018 Project." (The title comes from Pope's role in a Pew Foundation grant to research and play the work of Philly musicians like Trane in the era in which they all came up and made their mark.) A twisted bebop theme alternated with legato melodic interludes. Remarkably, and as if rising to heaven, Monroe quoted extensively from Bach's "Chaconne" violin partita during her choruses and then took rapid Paganini-like runs. So if you wanted cross-over music, here it was -literally. Pope got into Trane again with some high-pitched squawks that the audience really dug. This was followed by a dual saxophone chorus, and the piece concluded in an extraordinary way as the ensemble -with the harp as the locomotive—created an uncanny feeling of a train in motion even more believable than the rhythm of Billy Strayhorn's "Take the A Train."

Set List: Collage; Knot it Off; Bellissima; Framed in a Picture; 2018 Project.