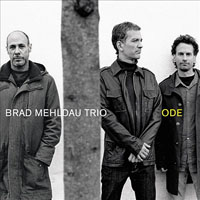 Seven years separate Ode from this trio's last studio recording, the outstanding Day is Done (Nonesuch, 2005), which has come to mark a before-and-after in Brad Mehldau's trajectory. Previously, the pianist had recorded in a traditional trio setting with few exceptions. Since Day is Done, however, Mehldau's projects have covered much more diverse terrain: setting poetry to music with classical soprano Renée Fleming; rubbing shoulders with guitarist Pat Metheny; and blending classical and popular song with mezzo-soprano Anne Sofie von Otter. Highway Rider (Nonesuch, 2010) was an orchestral suite of cinematic scope, while Modern Voices (Nonesuch, 2011) paired Mehldau with pianist Kevin Hays, simultaneously working their way through the compositional frameworks of Patrick Zimmerli and other contemporary classical composers.

Mehldau has stretched himself in live performances too, appearing with mandolinist Chris Thile. While these collaborations have been hugely satisfying, his trio's studio return is most welcome; it feels a little like slipping on your favorite sweater. That's not to say that nothing has changed since Day is Done; Mehldau—one of the great modern interpreters— eschews covers here, presenting 11 beguiling originals. His writing and playing are leaner and more melodic, without sacrificing any of the trio's habitual dynamism.

Ode contains plenty of arresting improvisations. In this department, drummer Jeff Ballard and bassist Larry Grenadier are equal protagonists, shaping the flow and weight of Mehldau's tunes. Despite the lightness of the trio's playing, it conveys an inexorable forward momentum as witnessed on "M.B.," an ode to saxophonist Michael Brecker. Here, a simple melodic idea develops into an engrossing saga. As such, saxophonist John Coltrane's approach would appear to bear an ever greater influence on Mehldau's playing.

Mehldau displays one of the most distinctive left hand voices in contemporary jazz piano, whether employing minimal rhythmic pulses, as on "M.B.," or creating lines that are more discursive than contrapuntal. The latter is heard to particularly beautiful effect on the slow gem, "Dream Sketch." When Mehldau drops out, Grenadier steps up to solo, though the groove never diminishes for a second. Grenadier and Ballard's intuitive feel for the contours of a tune and for each other is a constant delight throughout the set.

"Bee Blues" is a cheery, undeclared ode to pianist Thelonious Monk. A slightly darker hue colors the deceptively simple "Kurt Vibe," where nuance is the key. Mehldau stretches out in typically expansive style with melody well to the fore on "26" and "Twiggy," while the spirit of trumpeter Dizzy Gillespie infuses the breathless trio romp, "Stan the Man." In contrast, icy impressionism gives way to a heightening sense of impending doom before quietly petering out on "Eulogy for George Hanson," and the seductively lyrical "Days of Dilbert Delaney" features one of Mehldau's finest extended solos.

On Ode, Mehldau further refines the relationship between composed and improvised form, infusing improvisations with a melodic, pop-like simplicity. His continuing exploration of the art of the trio is one of the joys of the contemporary jazz panorama.