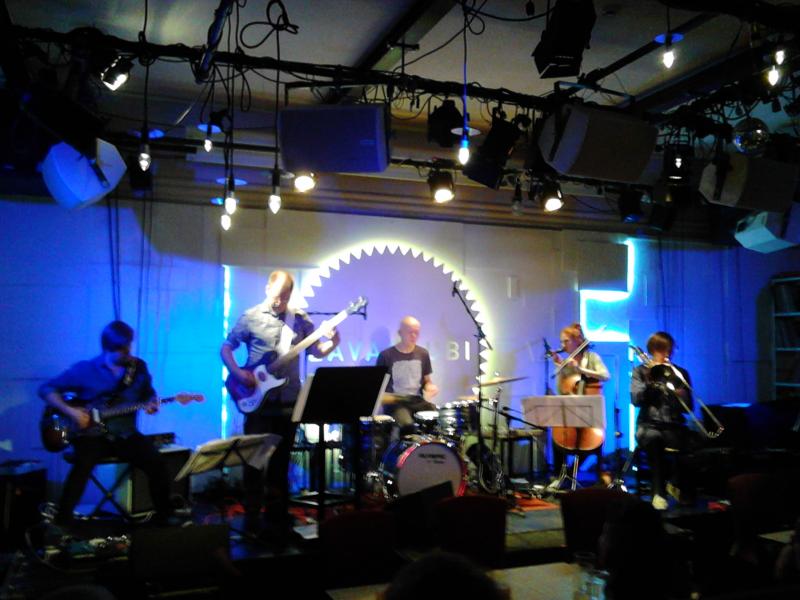 The name of this band itself conjures quite a mystery. Even in its Finnish homeland the word has no apparent association, except possibly the title of the local Saami or Lappish news broadcast, Oddasat! Actually an atmosphere of shamanic intensity is quite a close description of the slowly evolving ethereal webs that this five-piece weave.

Led by drummer Olavi Louhivuori, sitting beaming somewhat beatifically center-stage, the band divides itself physically and sonically into two: an electronic component stage right with two Lasses -Sakara on highly effected guitar and Lindgren on bass, and opposite them the acoustic ingredients of Ilmari Pohjola's trombone and Osmo Ikonen's cello. On this night however an extra element of the arcane was added with Ikonen's temporary replacement Anni Elif Egecioglu, wielding her bow also on the 3-stringed Turkish kemence and adding her typically eerie voice, both with and without processing. Outside her normal role as vocalist, keyboard and compositional creator with avant-garde jazzers Elifantree, her presence here was less dynamic but certainly added to the mystique of this very unconventional instrumental line-up.

All members except Sakara, Louhivuori included, defer at times to keyboards when the compositions demand it. Obviously the music is highly structured and the sounds are thoroughly premeditated, washes and delays often reverberating between each side of the band. Without any regular vocal component, following in the sonic footsteps of their forebears neo-proggy XL Finland or ethno-jazzy Zetaboo (read my OuterRail review), Oddarrang rely on this interplay to build tension and climax in their lengthy pieces, such as the new guitar-led composition "Doxa" and their final piece of the evening "Four Words."

The intimate and cavernous surrounds of the Lavaklubi, just 100 meters from the main entrance of the Helsinki railway station and located in the underground vaults of the city's majestic National Theater, were rather cramped for some of the vistas created. Without the projected images used on their earlier tours, the shallow stage forced the band to work in each others' laps, bringing the act very much down to earth, showing that they are as much a regular gigging band as purveyors of other-worldly soundscapes. And all without a hint of dry ice!