By HRAYR ATTARIAN
October 31, 2013
Sign in to view read count 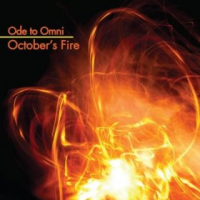 The Philadelphia based collective, Ode to Omni's debut album October Fire is heavily influenced by the 1970s spiritual jazz recordings, particularly those on the legendary now sadly defunct label, Strata East. A couple of gem's that instantly come to mind are The John Betsch Society's Earth Blossom (Strata East, 1972) and Billy Parker's Fourth World's Freedom of Speech (Strata East, 1974). Much like Betsch and Parker, the leader of Ode to Omni, Marcus Myers is also a percussionist and under his deft direction, the dynamic ensemble lays down ethereal and vibrant intricate sounds.

A more intimate vibe marks the cinematic "Fighting Through It." Trumpeter Rick Rein's solemn tone soars clear and wistful over the rhythm section's earthy rumble. Saxophonist Brian Blaker's warm, thick and mellifluous tenor follows in a series of short, poetic phrases giving way to guitarist Andy Calabreese's sonorous strums that echo with a bluesy theatricality. Trombonist Matt Fischer growling, simmering improvisation brings proceedings to a close with the perfect balance of the empyrean and the organic.

The disc concludes with the folksy, lyrical "Winters Abyss." Singer Alita Moses' pure, rich voice and crystalline articulation is like a cascading, cool spring falling on the band's undulating sway. Trumpeter Joe Anderson's unaccompanied horn enhances the mysticism of the piece with its vivid yet mellow long notes.

The song stands in direct contrast to the deep wisdom of the fusion-esque "All I Have" with vocalist Maricia Danielle enunciating the contemplative words in her honeyed, smooth and emotive delivery. The fiery passion of Myers drums and Nussbaum's wailing guitar bring an ardent exuberance to the tune

Although a tad derivative in their creative outlook, Ode to Omni makes up for its raw tenderness and paucity of innovation with a thematic unity and an unbridled, infectious enthusiasm. If they stay this course, Myers and his cohorts in this delightful collaborative ensemble, all have bright futures full of promise.

About Ode To Omni