By FRADLEY GARNER
October 13, 2010
Sign in to view read count 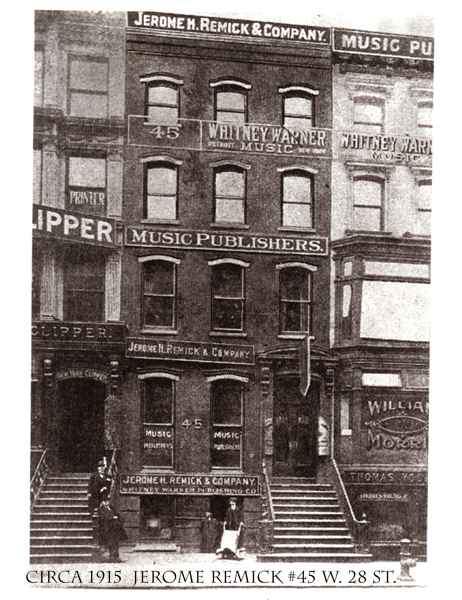 Tenants of Tin Pan Alley are showing ever more pride in their habitat. Apartment residents and ground floor shops occupy the row of five historic brownstones on West 28th Street, Manhattan, where America's enormous sheet music industry took root in the 1850s. Here the careers of galleon figures Irving Berlin, W.C. Handy, George Gershwin and Ira Gershwin, and James P. Johnson were launched. An attorney who wants to do more than keep the wrecker's ball off the buildings, has helped tenants promote their first-ever art show. Simeon Bankoff, executive director of the Historic Districts Council, says the structures "are safe and will be preserved" as long as they're occupied. But should the landlords ever manage to evict the tenants, Bankoff told me, "the buildings might be in jeopardy again. I personally would prefer them to be used as they are now, as residences with a commercial presence on the ground floor." If one store could be turned into a historic museum and/or music venue, "that would be pretty neat."

Berlin was the site not long ago of the debut performance of Swing Symphony, the third symphony of Wynton Marsalis. Its five movements evoke jazz and pop, ragtime, mambo, bebop and gospel music. A cut, 45-minute version had its American premiere Sept. 22, with Alan Gilbert conducting the combined New York Philharmonic and Jazz at Lincoln Center orchestras, and the Pulitzer prize-winning composer in the JALC trumpet section. The New York Times gave it a mostly positive review, noting that many Philharmonic players "looked as if they were enjoying themselves immensely, as did members of the audience, which gave Mr. Marsalis and the musicians a standing ovation," wrote Anthony Tomassini. "I have never seen so many people at a Philharmonic concert tapping their feet and hands. And this time it was entirely appropriate, not at all a distraction."

"The sultry sound of a saxophone floats through a windowless room several floors beneath Washington, D.C.'s rush-hour traffic. John Edward Hasse adjusts his chair in front of a camera, tapping his toes as the big-band tune "Take the 'A' Train" plays on a CD. It's 8:30 a.m. in the nation's capital, but it's 3:30 p.m. at the U.S. Embassy in Nairobi, Kenya, where a crowd has gathered to watch Hasse, via video conference, speak about the genre that revolutionized American music..." Thus opens an article in Smithsonian magazine about the national museum's music curator, whose daily task is to teach people worldwide about jazz. Hasse founded Jazz Appreciation Month, now celebrated in 40 countries and all 50 states. He recently joined an international panel to produce Jazz: The Smithsonian Anthology, a six-CD, 111-track set that revamps and expands the 1973 Smithsonian Collection of Classic Jazz. Go to smithsonian.com and search for "Ambassador of Jazz."

"In our program books, I always give a thank you to Vince Giordano and the Nighthawks," says Ray Osnato, founder and leader of the South Shore (Long Island) Syncopators, refuting Giordano's remark to this column that he had "heard through the grapevine this gent has many unfavorable things to say about my band and what I'm doing." On the contrary, the Long Island trombonist insisted in an email, "I have nothing but good things to say about the Nighthawks and all my colleagues know it—and so do people in Vince's band. Guys like Dan Levinson and James Chirillo know how much I respect the guy. He even sold me the very first charts I bought for the band." Asked to comment on this statement, Giordano e-replied, "Pass."

Marian McPartland, move over —and make room for Stephanie Stone, likely the only 89-year-old, avant-garde pianist on the New York scene. Ms. Stone, who worked the clubs in the 1940s and '50s when jazz spots dotted the city, performed recently in Three New York Women at the Stone, in the East Village. She soloed and backed the readings of poets Yuko Otomo and Eve Packer. The cellar space was named for Irving Stone, the pianist's late husband, by John Zorn, its founder and a saxophonist and composer. Since her husband died seven years ago, Ms. Stone has played regularly with some leading experimental musicians. The Wall Street Journal reports that she's had offers to record with bassist Greg Cohen and drummer Joey Baron.