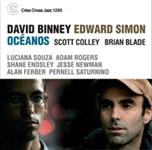 Alto saxophonist David Binney has had a very active year. The well-received Cities and Desire (Criss Cross, 2006) was an intense and autobiographical album. Oceanos, co-led by pianist Edward Simon, offers a diverting and more satisfactory package.

Simon and Binney go back a long way and have recorded together on various projects over the years. In addition, Simon has received much recognition for his long-standing role as composer/pianist for Bobby Watson's Horizon ensemble. What is especially attractive about this project is the variety of shading and moods provided. A core group of Binney, Simon, bassist Scott Colley and drummer Brian Blade are augmented with various guests during the course of the album.

Vocalist Luciana Souza provides vocalese on several occasions, including the opening "We Dream Oceans, where a subtle Latin pulse adds to the quartet's presentation. On the ballad "Govinda, Souza again adds much to the beauty of the melody. Another highlight is Adam Rogers' guitar work on the same track, as well as his textural additions to "Impossible Question" alongside an added horn section. For a Latinized original, " El Parrandero, led by percussionist Pernell Saturnino, it is possible to envision a post-millennium Gato Barbieri offering with Binney's booting solo doing it even better.

Throughout the album one is aware of Simon's classically-trained pianism providing the way for these musicians as they firmly establish a series of emotions that reflect peace, renewal and even urgency.

Visit David Binney and Edward Simon on the web.