By TROY DOSTERT
February 21, 2017
Sign in to view read count 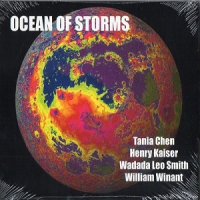 In between stints as a videographer of below-ice underwater regions in Antarctica, guitarist Henry Kaiser maintains a remarkably busy agenda as an improvising musician. Here he's joined by Wadada Leo Smith, an occasional partner going back to their mutual connection with Eugene Chadbourne in the 1970s and later collaboration on their Yo Miles! album from 1998. Pianist Tania Chen and percussionist William Winant, both of whom have recently worked with Kaiser as well (on Megasonic Chapel, from 2015), round out the group on these five substantial collective improvisations, all of which are inspired by the geography of the moon.

Each piece ranges from eleven and fourteen minutes in length, allowing plenty of room for deliberate, patient development. Aside from the tumultuous closing track, "Al-Kwarizimi," the record's method is one of restraint, openness and reflection: mood and feel rather than technical bravado. And from the start of the opening cut, "Bay of Honor," Smith's beseeching trumpet peal announces that his presence will carry a lot of the weight of this music. His restless yearning, the quest to find just the right note, however obliquely he may arrive at it, is unmistakable and gives these pieces their distinctive flavor. Whether teasing out his notes in agonizingly slow succession, as on "Bay of Honor," or generating the flurries that emerge during the more agitated "Sea of Crisis," he rarely lets loose with abandon, and the pensive, thoughtful pacing of his notes colors his contributions with the transcendent quality his fans have come to expect.

Although he does indulge in a good bit of amplified, fuzzed-out chaos with his electric guitar on "Al-Kwarizimi," Kaiser's playing is mostly low-key, with his precise, plucky acoustic parts a nice complement to the textures offered by the other musicians. His duo with Winant on "Montes Spitzbergen" is an especially sympathetic encounter. Chen's brooding piano, with suspended fragments and plangent chords, provides harmonic companionship to Smith and Kaiser, and Winant's remarkably creative range of percussive effects lends the right degree of mystery and wonder to these otherworldly soundscapes. Headphones are definitely an asset for appreciating the subtle shadings he provides throughout the record.

Listeners expecting dazzling virtuosity or high-energy fireworks will likely be disappointed; but those ready for collective improvisation played in a more tempered, thought-provoking vein will be amply rewarded.