By MARK SULLIVAN
February 3, 2018
Sign in to view read count 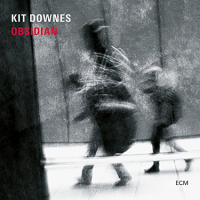 British jazz pianist Kit Downes has been previously heard on ECM on drummer/composer Thomas Strønen's first Time Is A Blind Guide album (2015). But in his early years Downes sang in a cathedral choir and took organ lessons. He recently returned to the pipe organ in a series of experimental projects with saxophonist Tomas Challenger, who is represented here on one track: the rest are solo performances which Downes describes as structured improvisations. Intrigued by the creative possibilities of the many organs in country churches around the UK (which are rarely used for new music or improvisation), he made a point of using organs of different sizes: large, medium, and small. Their different properties directly influenced the creative process.

The first part of the set employed the grand three-manual organ of London's Union Chapel. The large scale is immediately apparent on the opener "Kings." Downes uses it to more intimate effect on his delicate treatment of the traditional song "Black Is The Colour." "Rings Of Saturn" features clouds of harmony, with pitch variations created by manipulating the organ stops. As pianist Keith Jarrett noted during his church organ project Hymns/Spheres (ECM, 1976), it has an almost electronic sound, despite being completely acoustic. The big instrument is also capable of fast passages, as the sprightly lines of "Seeing Things" prove. "Modern Gods" closes this part of the program with Tom Challenger's tenor saxophone joining the organ. At first blending like "a rogue rank of pipes" (in Downes' description), he eventually splits off into a rhapsodic solo.

The second instrument is a two-manual organ at the church of St. John's in Snape. "The Bone Gambler" is a meditative exploration of the sound. "Flying Foxes" revisits the faster, rhythmic lines of "Seeing Things," but on a smaller scale. "Ruth's Song For The Sea" is as lyrical as the title implies, and "Last Leviathan" ends the segment with a dense harmonic exploration of this smaller instrument and its space. This ability to play sustained chord voicings is the defining feature that differentiates the organ from the piano: so it is only surprising that Downes didn't do even more of it.

The program closes with the smallest instrument, a single manual organ with no pedalboard (essentially a converted harmonium) at St. Edmund's Church in Bromeswell. Downes plays "The Gift," a hymn that his father composed. He says that he tried the tune on the larger organs, but only this humble instrument had the voice it required. It is a fitting conclusion to a lovely improvisational program. Not really jazz stylistically, Obsidian nonetheless has an expansive improvisational spirit, open to all of the tonal possibilities of a collection of pipes in a naturally reverberant space.