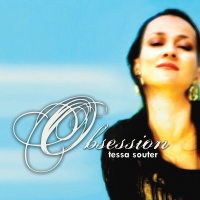 New York-based, British-born Tessa Souter is a jazz singer with interests far outside the jazz world. On Obsession, Souter mostly shuns well-trodden standards and classic jazz fare in favor of a varied set of rock, pop and Brazilian tunes.

With her rich contralto and crystal-clear diction, Souter delivers lyrics with a theatrical, but never overdramatic, flair. Nothing sounds forced or hurried in her delivery; she's a relaxed, confident singer who succeeds at creating a romantic, vaguely tropical mood with apparent ease. And she knows how to get inside a song, even a familiar one, and make it her own. She treats The Beatles' "Eleanor Rigby" plaintively without turning too morose and offers a sophisticated, reflective reading of the late British folk-rocker Nick Drake's "Riverman."

Many of the tunes have a Brazilian flavor, including a highly original reimagining of Cream's '60s hard-rock anthem "White Room," with an arrangement by guitarist Jason Ennis. The Brazilian theme continues on delightful versions of two songs by Milton Nascimento, "Make This City Ours Tonight" and "Vera Cruz (Empty Faces)." Other highlights include a simple, yet soulful take on Mongo Santamaria's "Afro Blue"; a moving rendition of Alex Nort's "Love Theme from Spartacus," with Souter backed only by guitar and bass and the singer's own "Usha's Wedding," an enchanting Middle-Eastern-inspired tune.

Backed by a small, spare ensemble led by Ennis' acoustic guitar, Victor Prieto's accordion and Todd Reynolds' violin, Souter has made a deeply satisfying album of jazz and jazz-inflected music that should appeal to a wide audience.