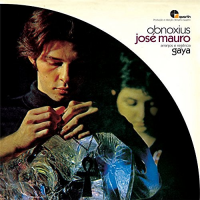 The oddly-titled Obnoxius bears precious little, and yet quite curious, baggage. Little is known about its original 1971 release other than it came out on a label founded by Brazilian producer Roberto Quartin, who also worked with Eumir Deodato.

We seem to know even less about songwriter, guitarist, vocalist and arranger Jose Mauro. We know he co-composed Obnoxius with Brazilian writer and journalist Ana Maria Bahiana, and, from its lushly layered sound, that Mauro greatly admired the orchestral arrangements of Lindolfo Gaya, one of Brazil's most accomplished composers, arrangers and orchestrators.

But there his trail stops: He seems to have disappeared before Obnoxius was finalized for release. Rumors of his disappearance include him being abducted by the Brazilian military to silence his voice, or being killed in a fatal car accident. Eventually, Quartin finished Mauro's project with subtle yet brilliant string arrangements and released Obnoxius.

45 years later, as the first title in Far Out Recordings' planned series of Brazilian label reissues, Obnoxius unveils deep and mysterious, dreamlike—almost subliminal—music. Like Antonio Carlos Jobim, Mauro does not sing with exceptional vocal technique but wins your ears over with the great feeling and nimble phrasing of his plaintive, genuinely warm voice. In the opening, title track, his spoken word vocal flutters like a bird trapped in its mainstream 1960s jazz brass arrangement. "Tarde Nupcias," a glorious combination of percussion, guitar, horns and strings, lasts little more than two minutes but renders emotion and ideas so much bigger than that. Built upon swirling strings, Bahiana's mid-song recitation and Mauro's acoustic guitar chords, strummed more hard and dark, "Memoria" suggests an acoustic prayer played as a whisper by the Velvet Underground.