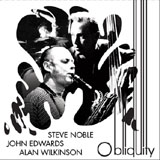 Just reading the lineup of this release started the adrenalin pumping and the pulse racing. All three are exciting, high-energy players who give their all every time they play. And here they are, together as a trio for the first time on disc.

Although it is a match made in heaven, it came about by chance when Lol Coxhill was indisposed for a trio gig at Wilkinson's club, Flim Flam, and Wilkinson came in as a sub. True to form, they do not disappoint here; from the very first notes, we are into a program of full-on, blistering music.

The music prowls the border between improv and free jazz, with one foot on either side of that border. All three players are regulars on the London improv scene, masterful at blowing up a storm with anyone at any time. The music here displays those capabilities, but it is also true to the long tradition of free jazz.

As a drummer, Steve Noble is not averse to rhythm and drive. John Edwards is a chameleon of a bassist, seemingly able to adapt to and enhance any ensemble. When the occasion arises—as it frequently does here—the pair can generate a fearsome momentum. For compelling evidence, the last eight minutes of "Cuttin' the P Nut" might appear to be dated from the late 1960s, maybe from a NYC loft. But time and place become irrelevant when music is this good; never backward looking, it simply taps into a great tradition and joyfully explores it.

Wilkinson deserves special mention. Always 100% committed, he makes any musical encounter vibrant. His tone on saxophone typifies him; its raw hard edge brooks no argument. Allied to the fluent torrent of notes that he pours forth, it guarantees thrilling listening. Here, on "Kwakm'bababli stomp," Wilkinson's wild, roaring wordless vocals generate the same excitement as his sax. Truly, fire music.