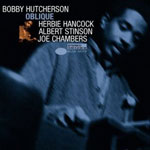 This album, recorded in 1967, is so special that it's hard to imagine why it wasn't released until 1980—and even then, only in Japan. Energy, creativity and empathy permeate it, and the players fit together wonderfully. Bassist Albert Stinson is subtle and inventive, making it all the more of a loss that he died two years later, at 24. Had he lived, he would have become known as one of the giants of his instrument.

The first piece, Hutcherson's "'Til Then, has a hushed feel, sounding on the surface almost like background music. Underneath, though, all sorts of nice things are happening, starting with a subtly asymmetric form. The intensity builds with each chorus, coming to a slow boil during Hutcherson's solo. "My Joy is a waltz reminiscent of "Little B's Poem, but it starts swinging hard immediately into the solos. The rhythm section's sensitivity comes through at the beginning of Herbie Hancock's solo, when the bass and drums go back to a sparser feel, while the piano keeps the momentum going.

The third piece is Hancock's theme from the Antonioni movie Blow-Up; Hutcherson and Hancock complement each other nicely. The samba "Subtle Neptune is another Hutcherson cooker with his best solo of the CD. Hancock's turn is a little long and meandering, but that's a small complaint.

The last two pieces are by Joe Chambers, one of the great composers in jazz. The title track, reminiscent of Miles' "Agitation, is the emotional high point of the album, whereas "Bi-Sectional is a typically complicated, arresting piece. A genuinely remarkable album.

'Til Then; My Joy; Theme from Blow-Up; Subtle Neptune; Oblique; Bi-Sectional.