By GLENN ASTARITA
February 13, 2016
Sign in to view read count 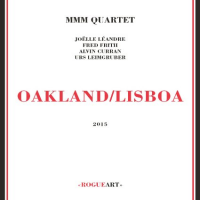 This multinational dream team's second album was recorded live at a venue in Lisbon, Portugal. MMM stands for Mills Music Mafia, alluding to the respective artists' tenure or residency at Mills College in Oakland, CA. As anticipated, the quartet embarks upon a course of ingenuity that would be difficult to top within global improvisational circuits. Indeed, active minds are on the loose here.

They navigate through jarring pathways and even integrate off-center folk into a few choruses; whereas, guitarist Fred Frith's delicate strumming on "Belem," underscores reedman Urs Leimgruber's weeping parts, also anchored by bassist Joëlle Léandre's roughhewn arco notes. Yet the band doesn't rest its laurels on one spot or motif, as they speed matters up with intersecting passages and mix it up along with Leandre's wordless vocals over the top. Many of these works include stop/start developments where the musicians alternate the flows and generate new plots on a nanosecond's notice. They also break into subgroups and toggle the fast and frantic pulses with rambunctious, or perhaps cartoonish developments.

Leandre's superior skills and keen insights equate to a cutting-edge nomenclature as she also makes her double bass sound like a violin during various progressions. However, each piece imparts a distinct story along with a zillion tonal contrasts. On "Maxwell Park," it would seem that Alvin Curran is using percussion samples to shade a cyclical theme, countered by the saxophonist's droning lines and Leandre's voice-induced harmonies. The final piece "Alfama," is a tour de force, commencing as a playful romp due to Curran's fast-moving chord clusters, sparking notions of a Silent Movie soundtrack only to become disassembled into an asymmetrical improv fest, including whimsical exchanges and concluding with a minimalist-type fadeout. Moreover, the audience was obviously appreciative via extended cheers and hand-clapping at the end, which pretty much sums up this rousing and rather mind-altering performance.