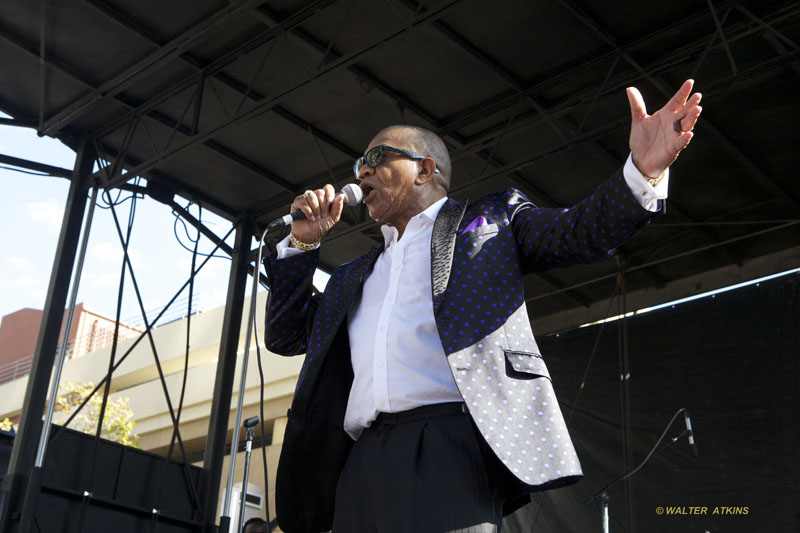 The Pacific Soul Band provided a solid party time punch with their funk and soul mix with songs from the late Rodger Troutman, and Bell, Biv, Davoe among others. —Walter Atkins

Saturday's warm and sunny weather cooperated all day long. The Clay Street stage featured gospel music groups, including the Love Center Choir, Nora Brown and IMC, Demetrius Tolefree, and the Oakland Interfaith Gospel Choir. Jovan Watkins sang the uplifting "Any Day Now" to a receptive crowd. The EBX Stage featured the always exciting hip-hop freestyle battle competition rounds with some returning participants from last year. This year also saw South Korean dancers along with a Norwegian contestant battling to be among the best. During a break in the all styles dancing action, aerial specialists BANDALOOP captivated the large crowd with their airborne choreography several floors above the stage. The busy festival staff, including experienced stage manager La Reva Myles, kept things flowing on schedule throughout the fantastic day.

The 2nd annual Oaktown Throwdown BBQ Competition proved to be just as popular as the 1st year, based on plenty of people queued up for the pit masters' spicy fare. This writer had the fish and chips and substituted garlic fries-very tasty. Among the numerous A+SF family-friendly rides and events for kids of all ages, was a paint wall provided by ArtisMobilUs, an Oakland based mobile art gallery.

Favorite Oakland vocalist Williams closed out the large A+S Main Stage performing his huge classics along with a few other songs. Williams' ecstatic fans gleefully packed the crowded dance space in front of the main stage while others grooved at their seats. Some festival supporters included a lively group of women who drove down from Santa Rosa to hear him.

The day's overcast and chilly weather required an immediate trip to a local coffee house for something hot. Fortunately, it slowly cleared up for another pleasurable day of music, fun, food and drink. The popular National Poetry Slam was presented at the Oakland Stage.

Celebrated East Bay jazz guitarist Obiedo and his potent band featured vocalist Leah Tysse who tore up the stage with her original R and B compositions. Two young local musicians, Lorice Dykes and Caleb Sankoh, sat in with Obiedo on alto sax and keyboards respectively. The Obiedo set became a family affair with guests Sheila E, Juan, and dad Pete Escovedo igniting the stage and the patrons with powerful Latin rhythms.

The Pacific Soul Band provided a solid party time punch with their funk and soul mix with songs from the late Rodger Troutman, and Bell, Biv, Davoe among others. The sizzling show band was fronted by vocalists: Joe Duron Jr., Jaci Mininfield, Brandon Tenedora, Ariel Deocares, Michael Pacis, and Marc Tenedora. PSB quickly made the house jump into their music. According to the nearby event staffer who was grooving to their rhythmic sound and choreography, "They got presence like a mugg!"

Hip hop singer Dyson with 34-56 also continued the strong positive vibe with a wide range of soul and rhythm and blues that included vintage James Brown numbers in his set. The dance space in front of the Clay Street Stage was overflowing with energy. DJD Sharp, The League, Martin Luther and others completely rocked the venue.

Oakland's 2015 edition of the Art+Soul Festival was another enjoyable weekend of exceptional music, food, and art that promoted the artistic richness and vitality of the SF Bay Area. The family friendly festival is an annual event well worth checking out next year.