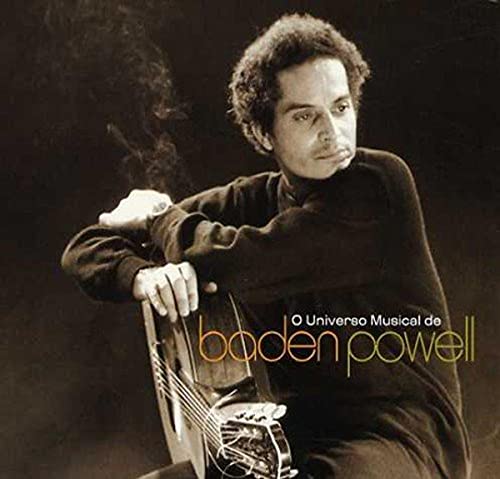 Baden Powell was a legendary Brazilian guitarist whom many consider the best of all time. A prodigy at the age of six, classically trained, his powerful sound and personality are unique and instantly recognizable. Unlike the velvety Joao Gilberto, who rode the bossa nova wave, and Tom Jobim, whose guitar technique was just enough to sketch his beautiful songs, there's no hint of pop in Powell. In fact, he left for Brazil for Paris just when the bossa wave was cresting, in 1963, and remained there for the rest of his life. His first recording in France made him a star; he made over fifty more and remains an inspiration.

This is a compilation from those early years, together with performances recorded a decade later. Disc one begins with one of his best-known compositions, "Berimbau," written with Vinicius de Moraes, a memorably haunting melody which has been covered by artists as far-ranging as Kenny Rankin. De Moraes also co-wrote the second track, "Girl from Ipanema," which is renewed here in Powell's hands, losing all of its familiar elevator-music quality. More of his compositons follow, as well as some by other Brazilian masters: Dorival Caymi, Pixiguinha and Aryosso, and a piece by Bach. It's a fascinating, dynamic mix, including tracks where Powell sings, is backed by an orchestra or traditional percussion, and plays solo or with a trio.

Disc two opens with "Xango," an "Afro-samba" that sounds like a soundtrack from a '70s Fellini movie. It's another powerful, intense collection, including Powell's stunning solo rendition of "Round Midnight."

This package is recommended for anyone who loves Brazilian music and masterful guitar. It's a fine sampler that beautifully demonstrates what the fuss over Powell is all about. (And by the way, his full name was Baden Powell de Aquino—he was named after the founder of the Boy Scouts. He died in 2000 at the age of 63, reportedly destroyed by alcohol.)