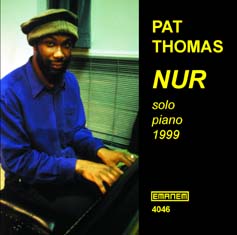 Pat Thomas is one of the UK's most versatile and unpredictable improvisers. His piano, electronic keyboards and (often eccentric) taped samples have featured in many memorable contexts including Company, Relay, in duos with Derek Bailey and with Lol Coxhill (their One Night in Glasgow is well worth seeking out), with Tony Oxley, and in the trio Powerfield.

Nur is Thomas's second solo CD. It is in complete contrast to his first, New Jazz Jungle: Remembering, which featured a typically radical amalgam of jazz and jungle, using electronics and beats. Although both albums feature Thomas alone, similarities end there.

On this album, Thomas plays unadorned solo acoustic piano, and the music was improvised from start to finish. The recording dates from a concert given in the chapel at Cheltenham & Gloucester College of Higher Education, which had both a Steinway grand piano and great acoustics. The concert took place in December 1999. Significantly, given that Thomas follows Islam, this was during Ramadan, the holy month of fasting and reflection. The combination of all these factors—the instrument, the setting, the timing—contributes to a reflective and spiritual mood. Anyone familiar with Thomas's electronic playing is likely to be surprised by his music here. There is little of his knockabout humour. (I particularly recall a version of "Uptown Top Ranking" that he and Coxhill belted out live at Spitz some years ago.) Instead, these are pieces that do not play to the gallery, but have an overarching logic and structure to them. Thomas pays tribute to Monk in "The Analogy" and, throughout, there is something of Monk in Thomas's playing. It is not possible to pin it down precisely—beyond "feel"—but it is there.

Aficionados of Thomas will relish this broadening and deepening of his work. Newcomers can just enjoy some fine original piano playing.